Is this the Civic-minded one of the lot?

(JANUARY 2019) During my time with Motor, I have driven three variants of the current generation Honda Civic. The streak started with a lovely blue 1.5 Turbo RS (Aussie version, mate). A few months on, I met this car again – only this time it had been caressed gently by the hands of Honda tuning guru Zakie Ismail, liberating 30 more horses from its engine. Not nearly a month later, I was introduced to Glenn Jayasekara and his banzai white Type R which had also received a stroking by Zakie, and put out 350+ bhp. That car remains ingrained in my mind as the best FWD manual car I have driven in my 11+ years of driving cars since turning 18. 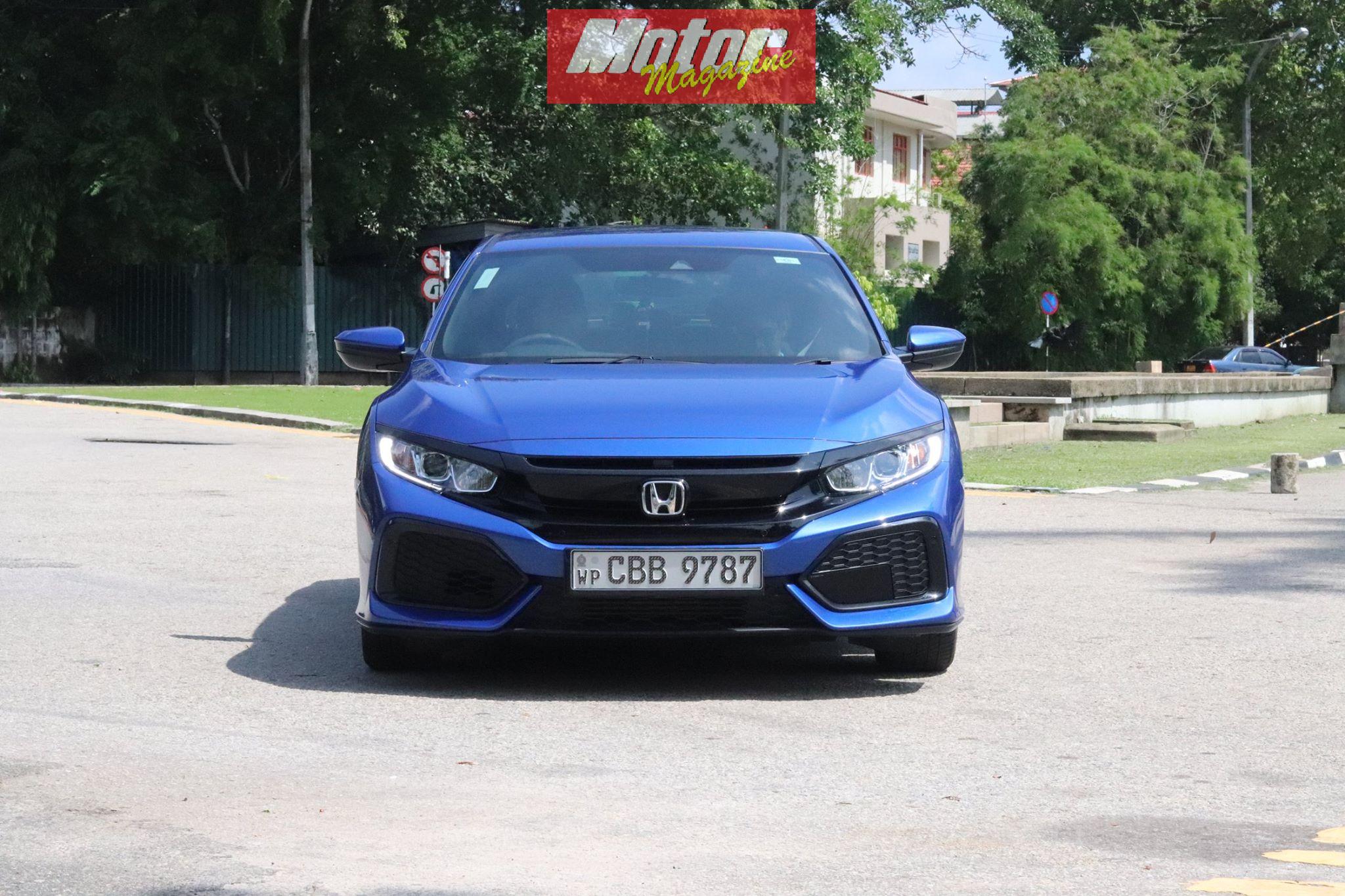 ﻿Then, it seems apt that I should drive the starter Civic as well. The 1.0L Turbo SR which is the smallest engine and lowest trim you can get of a Civic in Sri Lanka. The one for the civic-minded person who wants a family conveyance but not the usual hybridized options or rock-bottom Euros that also goes for the same money as this car. The car we are testing here belongs to Enuksha Coorey (no that’s not a spelling mistake in his surname) and is a UK model car. It came to our shores with around 5,000 miles on the clock. Coming from the top down can be difficult. Would I be objective enough without comparing too much to the top? It’s like trying ice-cream from a street vendor after eating Haagen-Dasz. Yet, that ice-cream vendor can also put a smile to your face by giving you sepia-tinted memories and a far lower impact on your wallet… 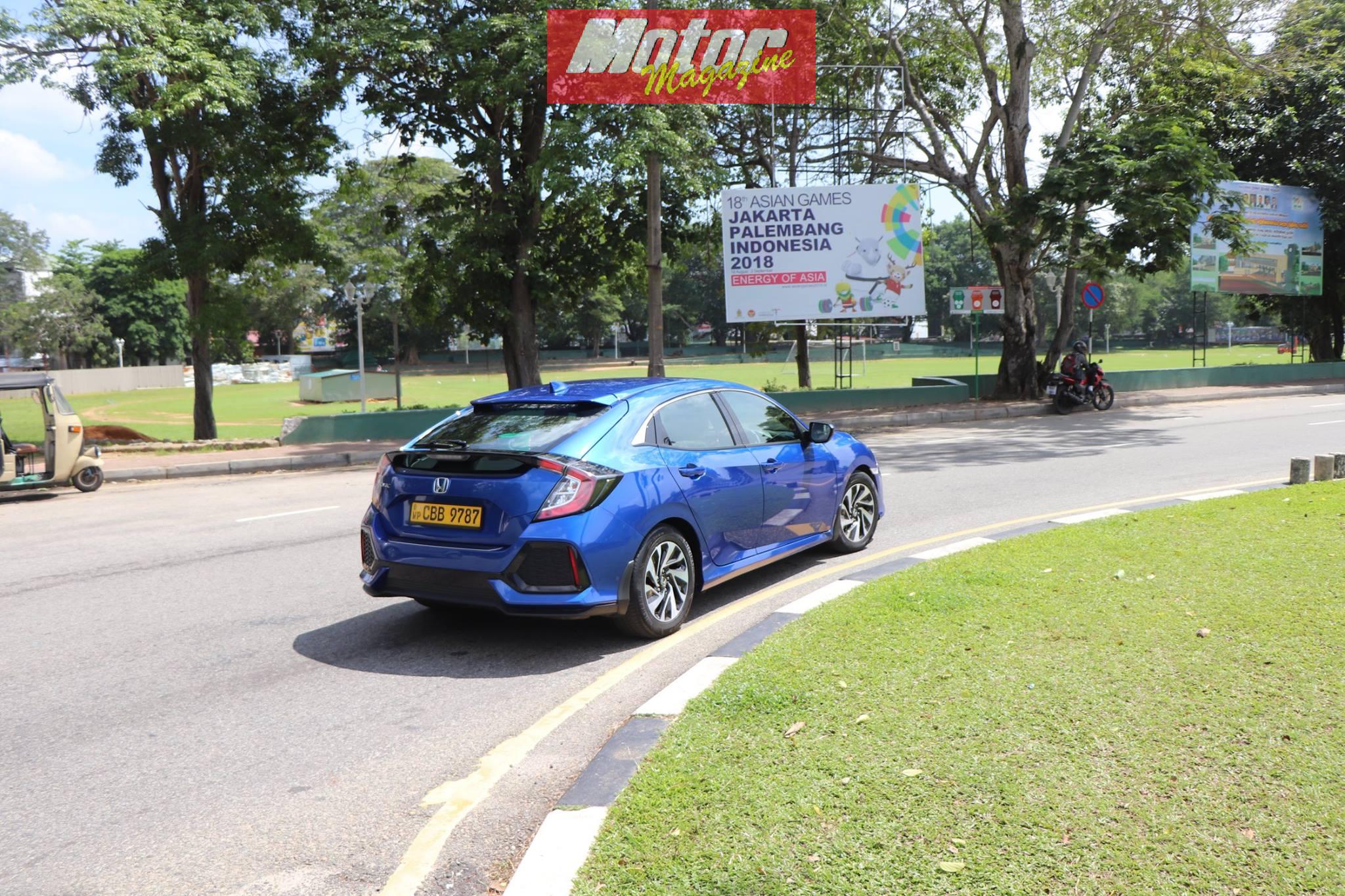 Even the garden variety Civic has plenty of lines, creases and details to make it stand out. Honda seem to have developed the ethos of “riced from the factory” at a cursory glance, just look at the Type R! Yet I read that the aero bits on that car are actually functional and keep it stable when approaching the 270km/h top speed. The garden Civic doesn’t need those. This car is very clearly designed in Japan, but has some Euro look to it as well. 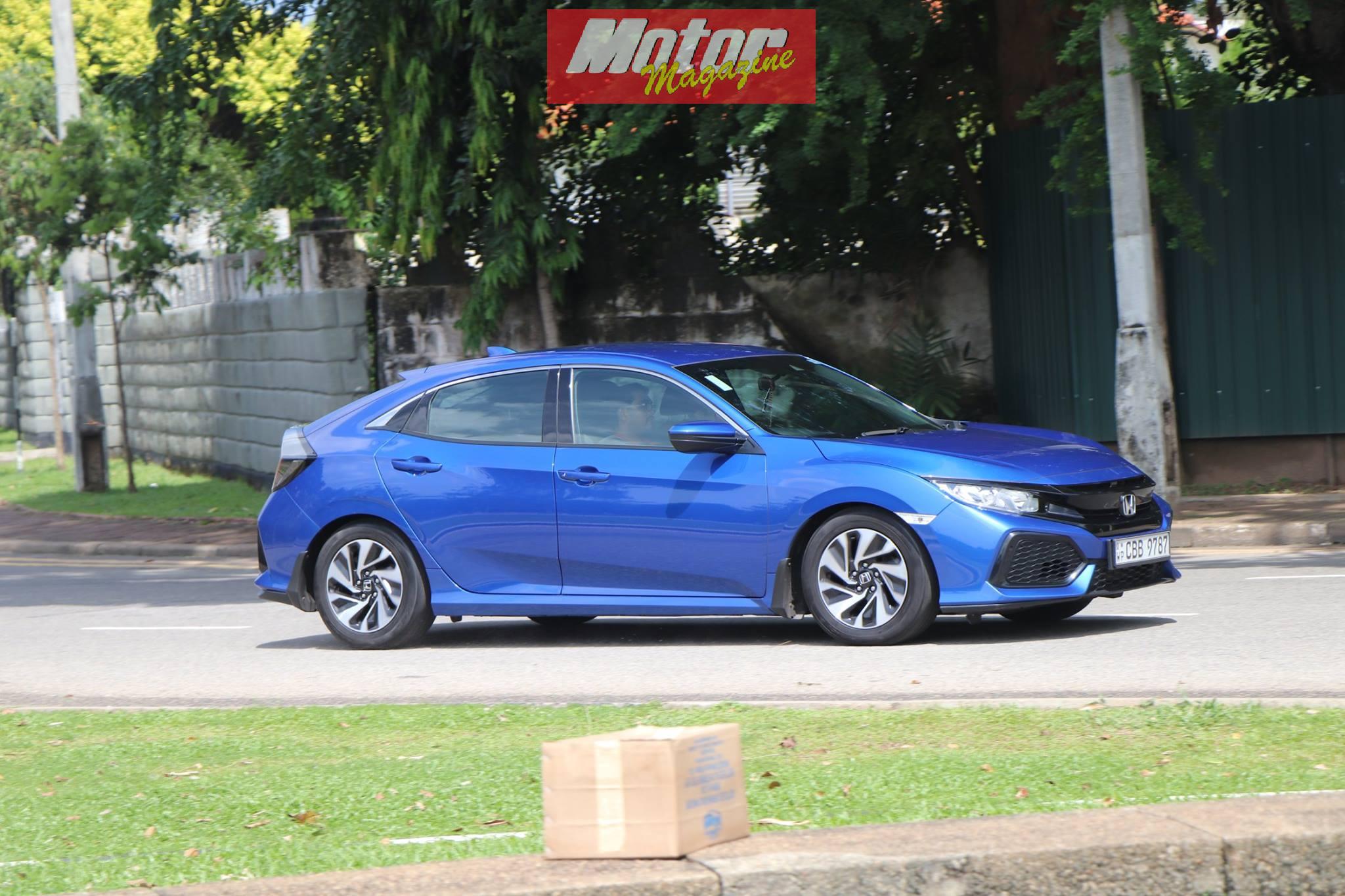 ﻿The rims are the standard 16-inch Honda ones, smart, but a change wouldn’t go amiss either. The headlamps are projectors (LEDs are available on higher models and trims). Speaking of trims, there are many. There’s the SR and EX and on top of that the Tech Pack option. Other markets have other trim levels too. There is no visible exhaust here but you can judge by ear on which side the engine expels its spent gas beneath the rear bumper. Front side marker lamps are present too, which are a rarity and one of those quirks demanded by the US market – the Civic has always been a US market favourite. 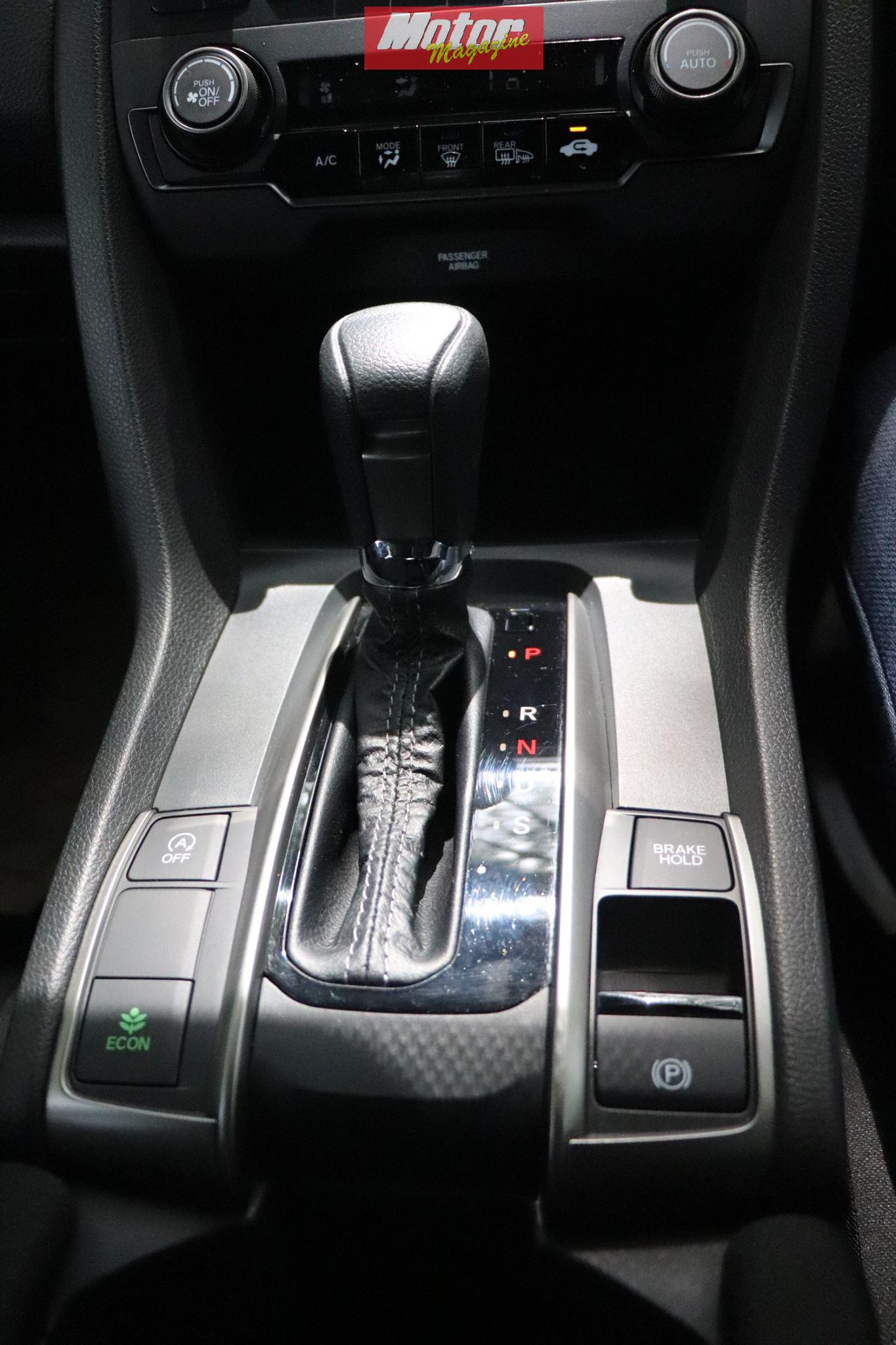 Ten years ago, if you said a Honda Civic had a 1000cc 3-cylinder engine you’d be laughed at and called mistaken at the very least (more likely some ‘kunu harapa’ would be there too). Yet, here we are, with a 998cc 3-cylinder turbocharged i-VTEC powerplant. It puts out 127bhp at 5,500rpm (redline is at a very un-Honda like 5,700rpm) and 180Nm of torque. It drives the front wheels through a CVT with a 7-speed simulated manual mode actuated with the steering wheel paddles. Suspension is multi-link all round with stabiliser bars, braking is via disc all round and the steering is an electric rack. 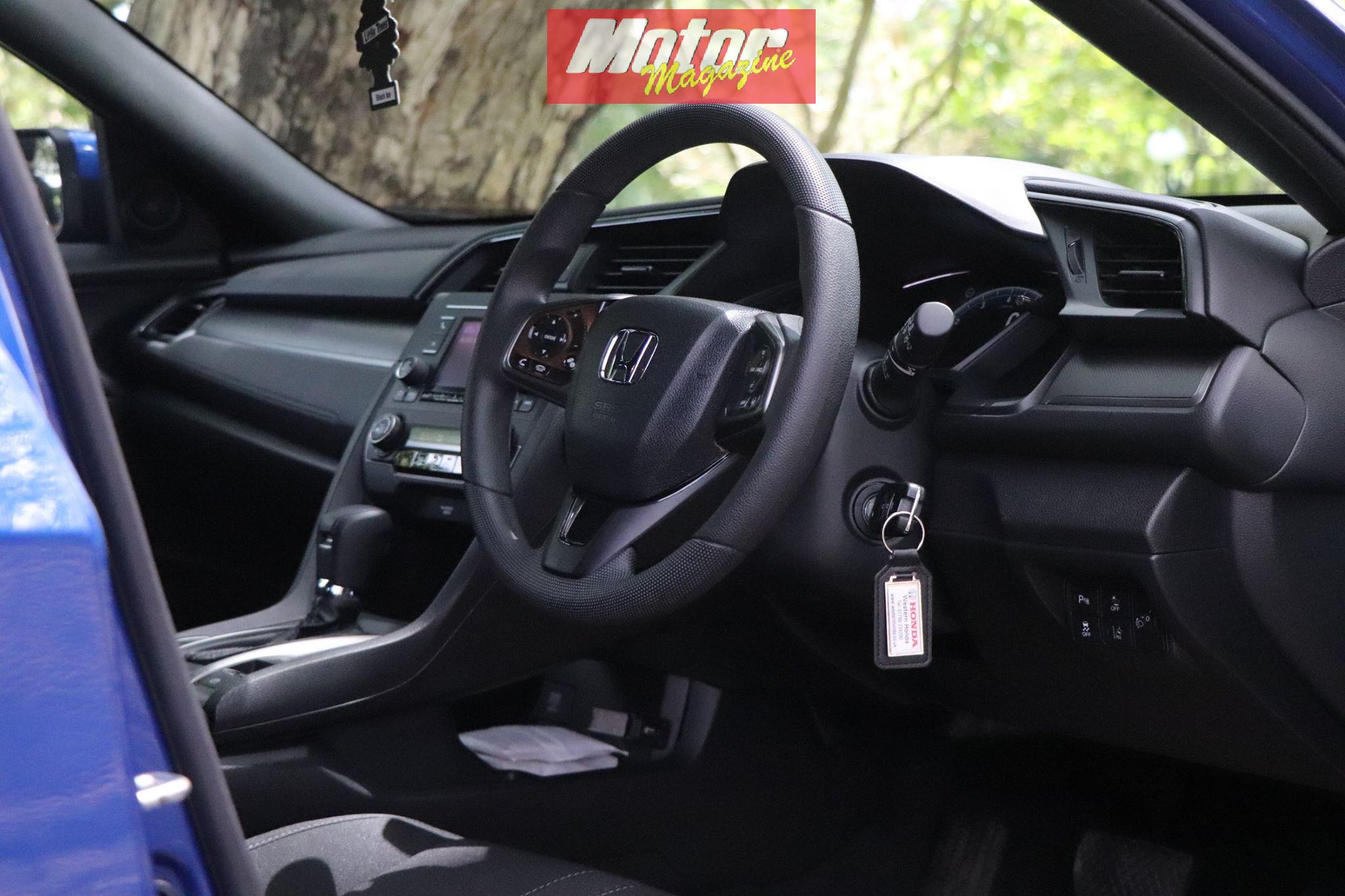 Settling into the cabin you notice the relative spec-down of the SR. The remote key must be fitted into a slot and turned much like a real key. This caused a mild scare for me as I exited the car to allow photographer Pasindu to shoot the interior and instinctively felt my right pocket where I keep key fobs. The lack of this had fellow tester Avinda and me in mild panic until we realized where the key was. The need to plug the fob into the car has an upside. It means that should your mother take the family car to drop you at the airport right after taking it over from your father, there would be no need to take a taxi home to urgently retrieve the spare key. Ask me how I know this. You pull levers to adjust the seat (no electrics here). Visibility is good all round and the major controls fall easily to hand. 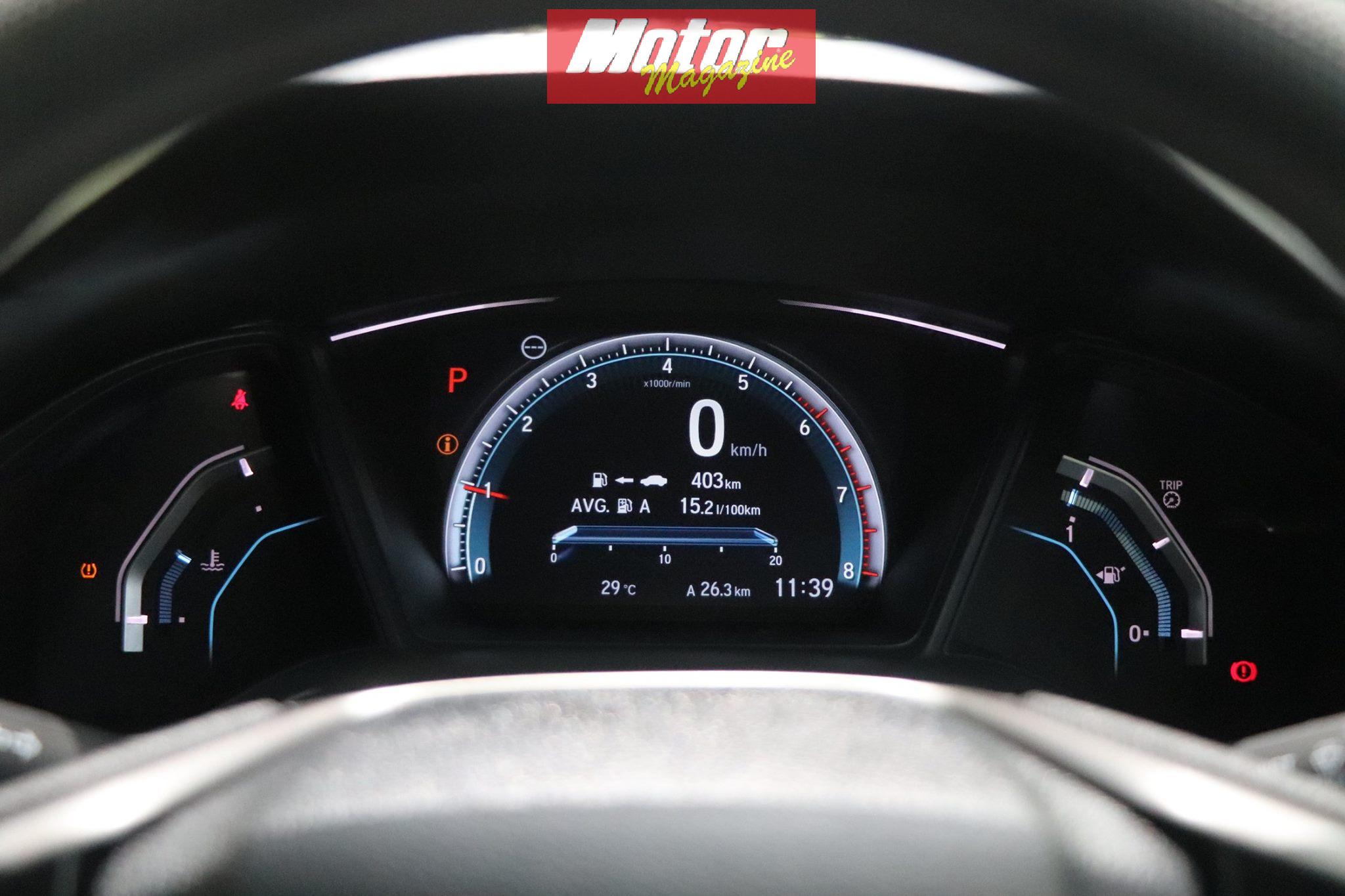 ﻿Select D, release the E-brake and you are off. The engine is quiet until around 2,500rpm when you can hear it in the cabin but it doesn’t get intrusive. Flattening the throttle results in the revs holding at around 4,500-5,000rpm usually, but a harder push through the defined kick-down point takes it all the way to the 5,700rpm redline. The car gathers speed smoothly; you will not be pushed into your seat but a look at the numbers on the speedo will confirm that you are going faster than you’d expect. The engine exhibits a bit of lag lower down so you need to use the mid-range at least to make good progress. The car is rated at 10.8 seconds from 0-100km/h and feels about right. The steering wheel paddles are a nice novelty but I found them pointless. The engine will shift up automatically when you reach the redline even in manual mode, and the car prompts you to shift up around 2,200rpm under manual mode driving – no doubt for economy reasons. 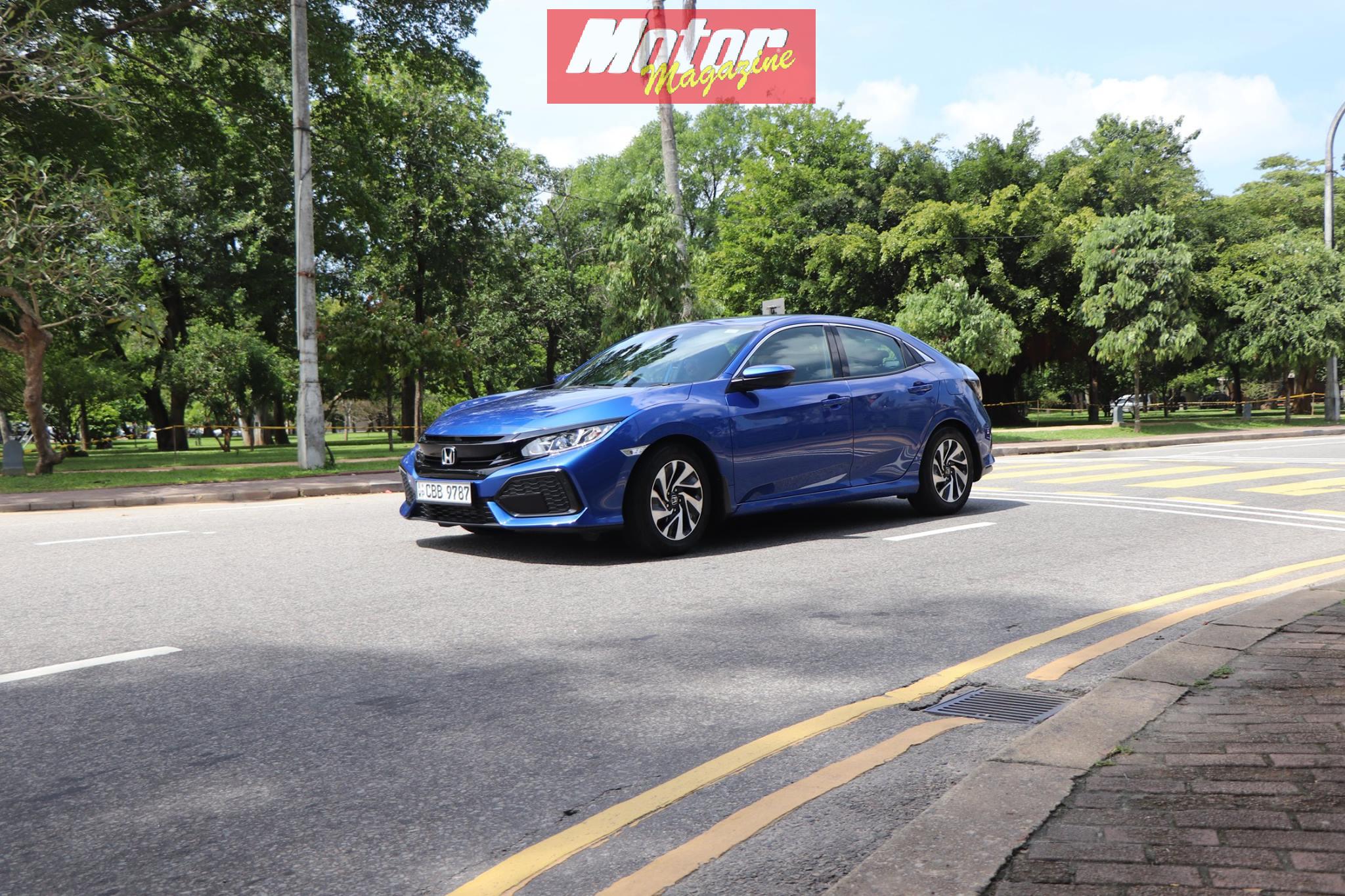 ﻿The handling is well resolved with low levels of body roll coupled with decent city comfort. You can hustle it nicely into corners and it will slip a little bit once the grip of those 215-section tyres is exhausted, resolving itself into mild understeer. A quick steering of 2.2 turns lock-to-lock adds to the fun factor. Yet when the manholes and speed humps present themselves the Civic acquits itself nicely too, with decent damping and cushioning of the occupants from the road detritus. It’s firmer though, than most other Japanese (agent and grey market) options, so bear that in mind and take a test drive if you are planning to buy. The ground clearance is a tad low too, and you will read about this in online forums so bear that in mind too. The braking is more than enough for the course – it feels like these brakes are the same as on the more powerful 1.5T RS. Civic minded family mover indeed, the 1.0 SR is a family workhorse that won’t cause the mother-in-law to protest, but has that little extra bit of excitement for the driver when the mood strikes. I recommended that the owner pay a visit to Zakie for a power upgrade when he feels like it.

The SR is a bit pared down and it shows on the inside. For starters you get a regular Radio/Bluetooth/USB sound system with a smaller colour screen rather than the large touchscreen on higher specs. Climate control is a button and knob-controlled affair too (single zone) that I prefer. The upmarket variants require you to use the touchscreen to even adjust fan speed! I read online that the 2019 Civics onwards resort to a traditional button and knob-controlled climate control system in response to customer complaints that using the touchscreen for climate control functions was a bit cumbersome. 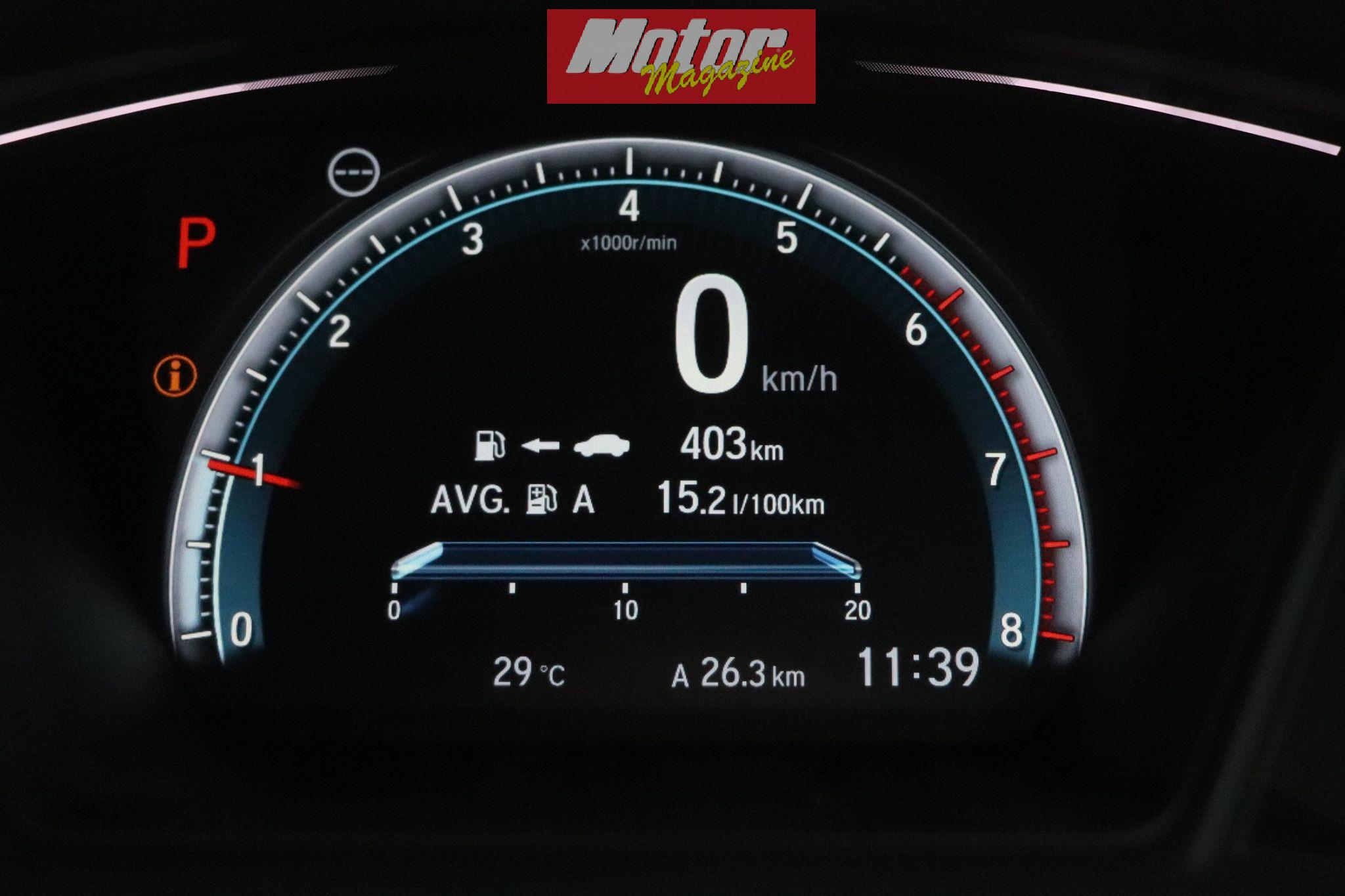 ﻿The instrument panel is still all-digital and has many functions that you can view such as safety system information, fuel consumption and media information, but it lacks the cooler stuff of the RS and Type R such as the boost gauge and G-meter. I’ve seen a G-meter on a 5+ million rupee crossover that I didn’t see the point of, but the Civic is definitely one car I’d like to see a G-meter on. 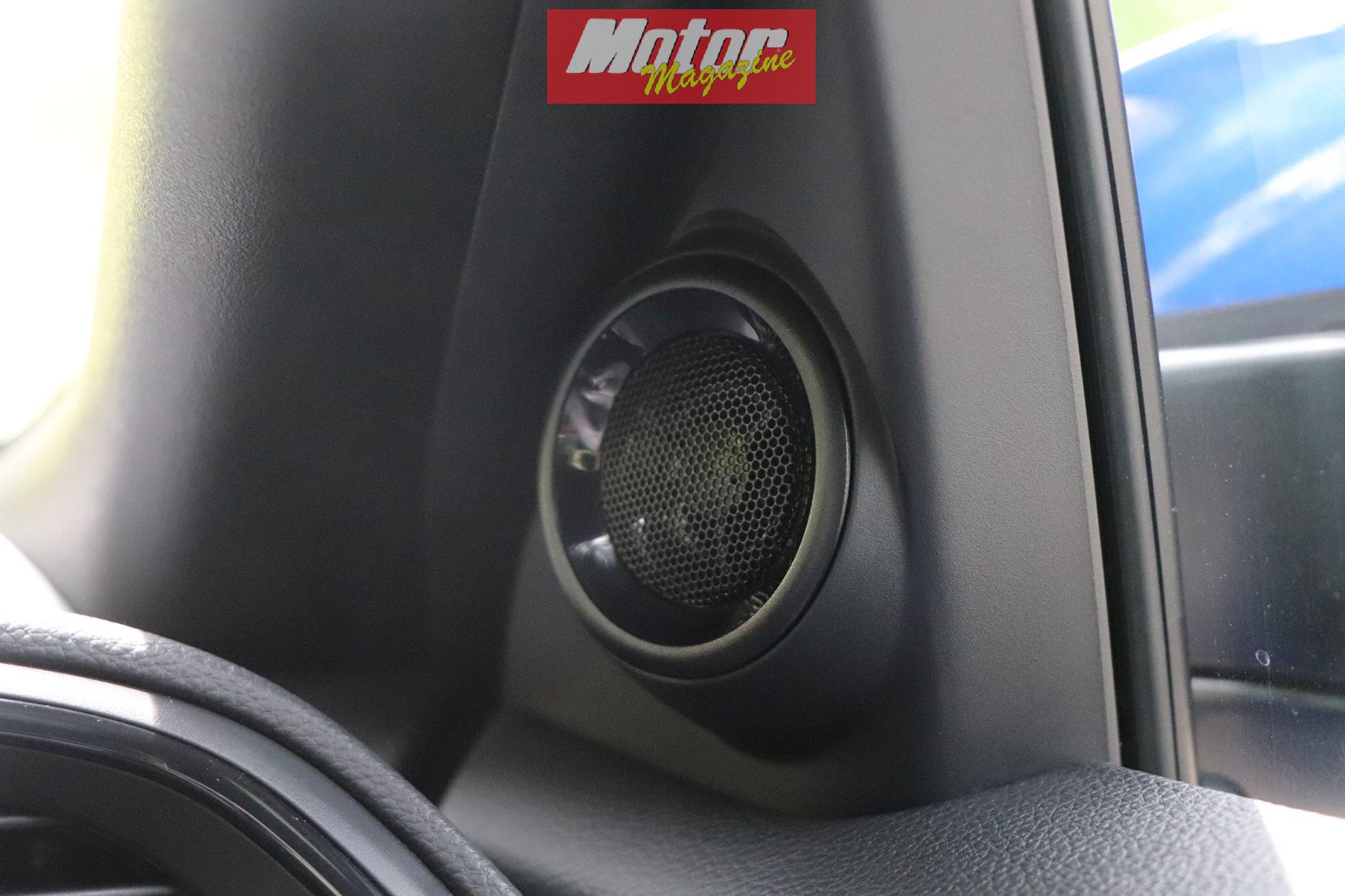 ﻿The aforementioned stereo, although lacking Android Auto / Apple Carplay functions still sounds nice as it drives through eight speakers. You also get folding mirrors which some other cars tend to forego in lower specs, some nice seats and the interior is more plasticky but decently finished – it’s not scratchy. It is however very black in there as the Japs seem to have made black the new brown!

﻿Rear seat space is more than enough for adults and you get a decent boot space too. You don’t get a reversing camera in this trim, but do you really need it in a vehicle of this size? If you find that you can’t do without it, go and re-take your driving test, pronto! ISOFIX mountings are there for your kiddie seats. 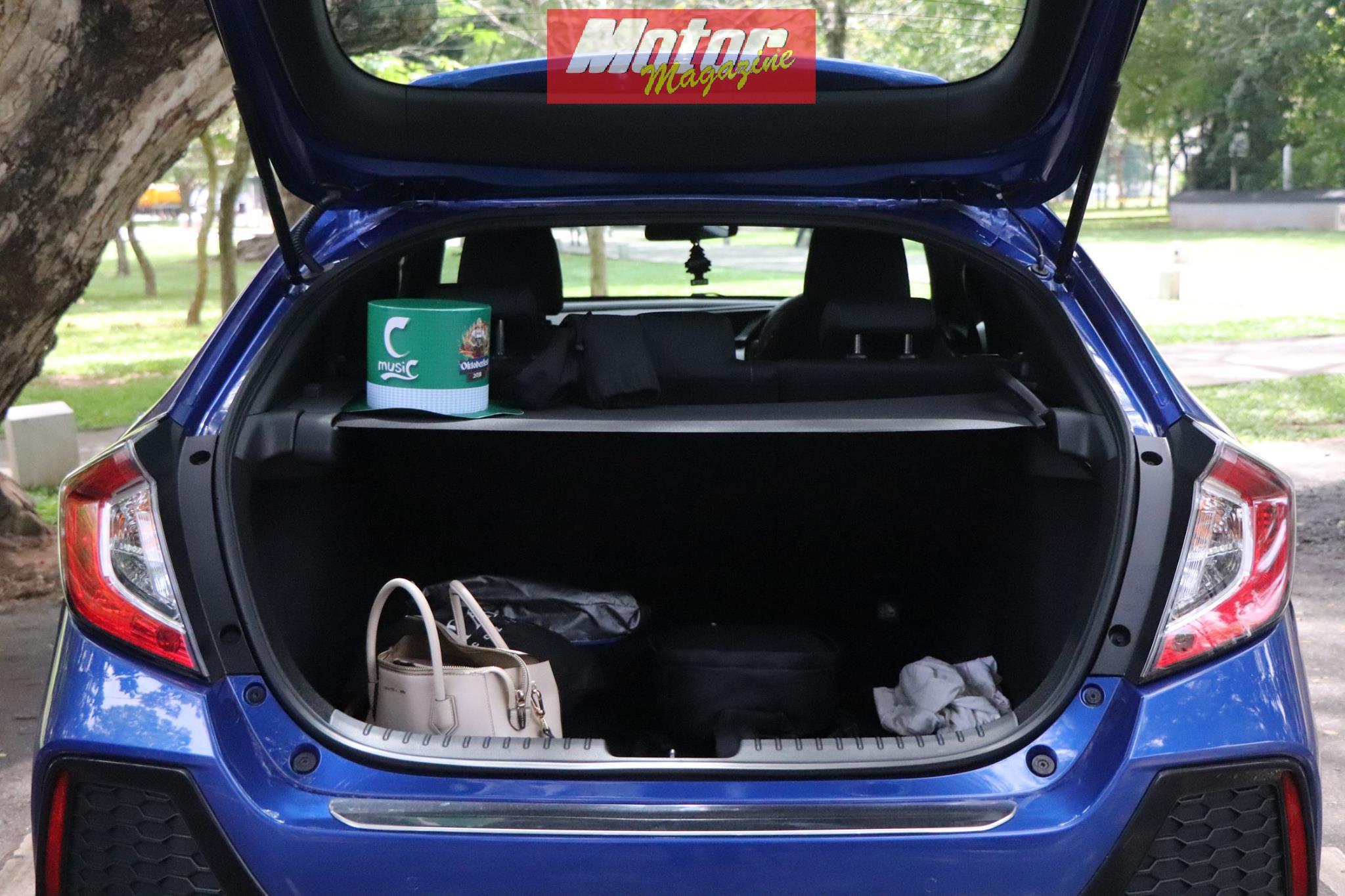 ﻿There aren’t any rear AC vents which the smaller (albeit JDM) market Grace has but the system on this UK-spec car blew nice and cold throughout our sunny day test. 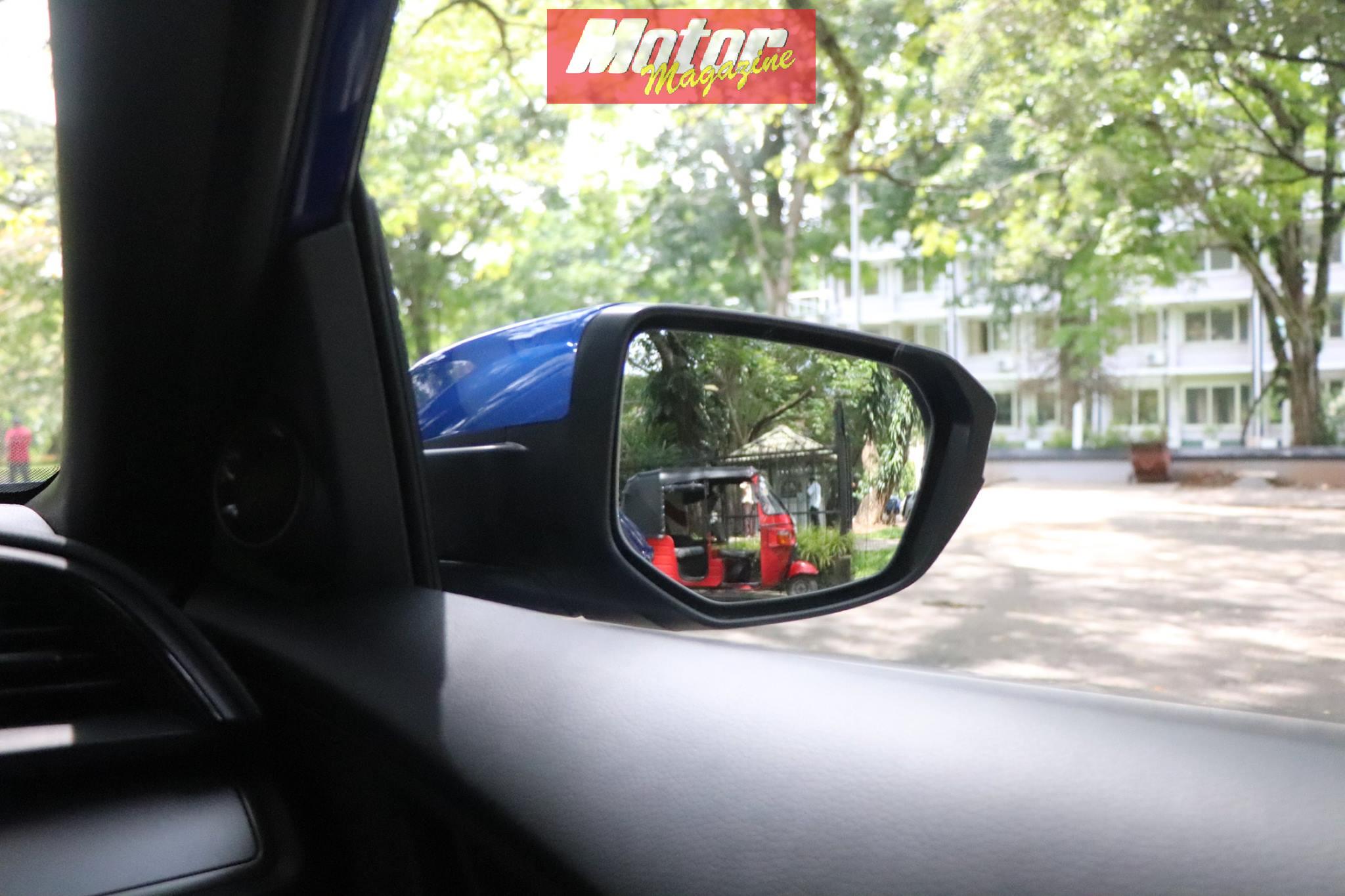 At this price point, getting six airbags is nice when the average is decidedly lower on other options. Of course ABS and stability control are there too. You also get adaptive cruise control, lane departure warning, blind spot assist and forward collision warning among other things. Whoa! That’s a comprehensive safety suite. Well done, Honda!

Five stars for this! That’s not usual... Let me explain. The owner says he consistently gets 10km/l in the city on his regular drive, dropping to around 9km/l on an enthusiastic drive. That’s good enough given how our Colombo traffic is. The Civic has stop-start for a teeny-weeny bit of fuel saving but other than that it doesn’t pretend to be an eco-mobile because it isn’t. For it to do 9-10km/l in Colombo is decent. Even when we drove it hard it on our test drive, we saw 7km/l. No doubt an outstation / highway foray will give higher figures. Price is another attractive factor. This car cost Enuksha just south of 6 million as he got a friend to bring it down from UK. We see SRs advertised in the 6.2-6.5 range depending on mileage and options. That alone is a very attractive factor for the car. He gets his car serviced by the friendly folks at Stafford Motor Company and is very pleased with the professionalism and attention to detail that they practice. His overall experience with them in his words is “very good and thorough”. 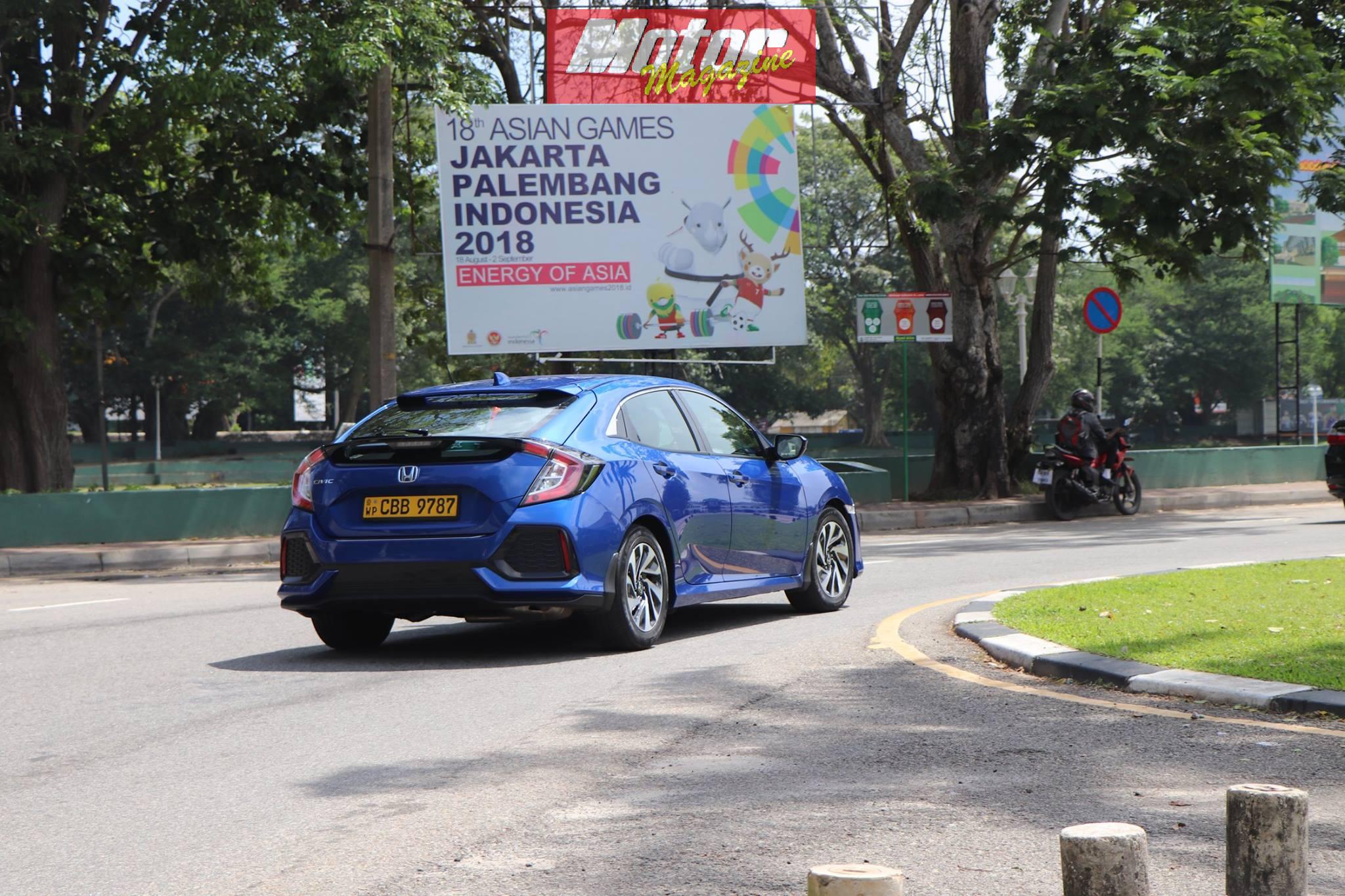 How did I find the base Civic? Well, it’s a Honda through and through. While other manufacturers are happy with around 110bhp from their litre three pots, Honda went the extra mile and squeezed out 127bhp. They gave it paddle shifts, wrapped it in an attractive body and endowed it a decent level of kit – especially in the safety arena. They knew that if the boy or girl racer of the family decided to sneak out once mama and dada were asleep and ended up wrapping it around a tree, he or she would have a very good chance of surviving to properly receive the requisite ass-whopping, grounding and shaming for years to come. In conclusion, it makes a lot of sense and is a very compelling option at the 6-million rupee price range if you are not looking purely at fuel economy and nothing else. It’s a car that you can drive to work and back, on long trips and have fun with when the mood strikes. Being a Honda, it also has a decent range of tuning scope, so why not consider one? Maybe that’s the reason they are selling pretty darn well in Sri Lanka! 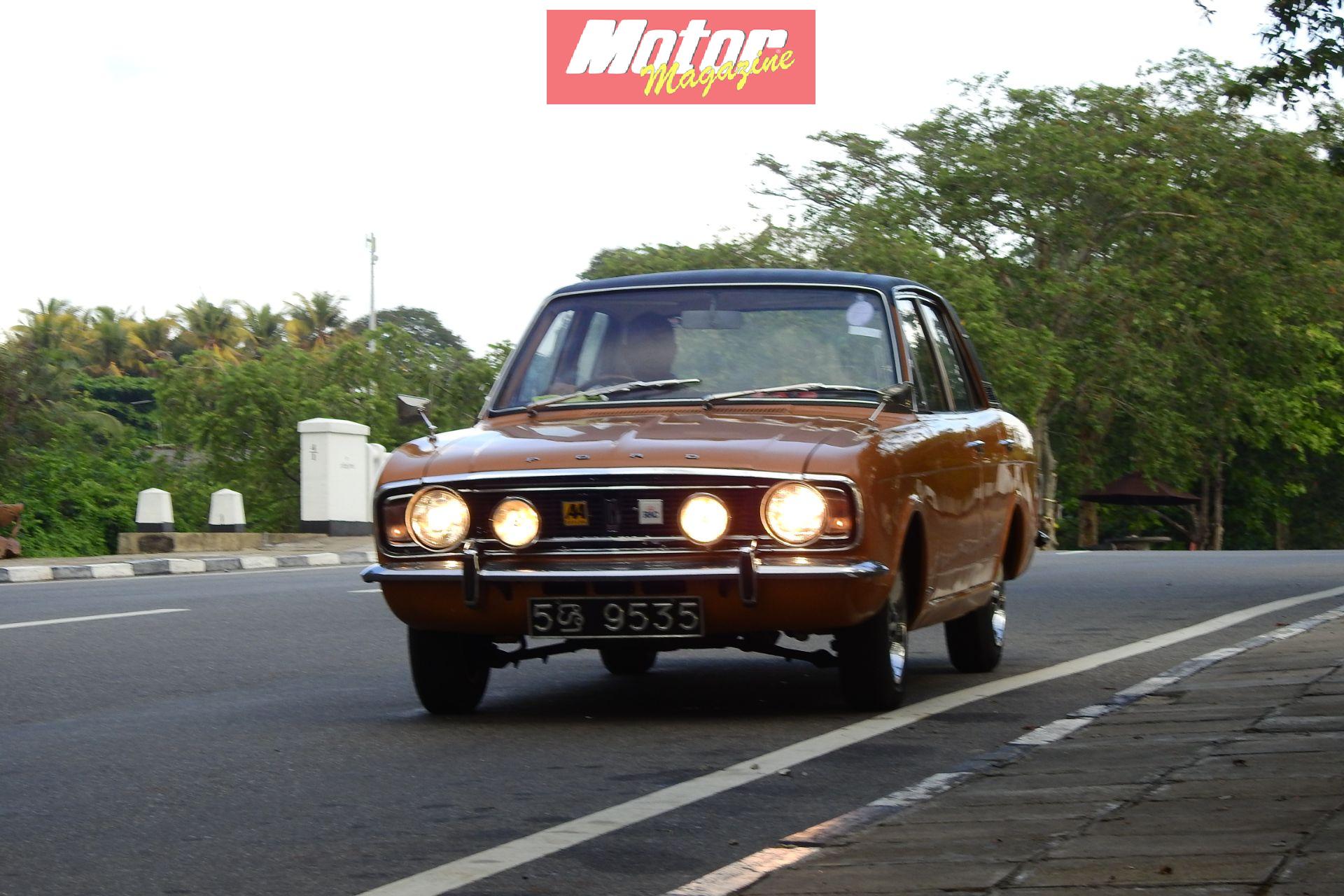