Audi’s been banging out the A5 since 2007, as part of their range-plugging drive. In fact, as of 2022, you can buy an Audi from A1 to A8, save for A2, but I’m sure they will plug that in time to come. The A5 was introduced as a compact executive car, for those who wanted a more stylish A4, as well as the coupe and convertible variants that previously came under the A4 range. Currently on the second generation, the A5 comes as a coupe, cabriolet or sportback, the latter of which we’ve tested way back in July 2018. 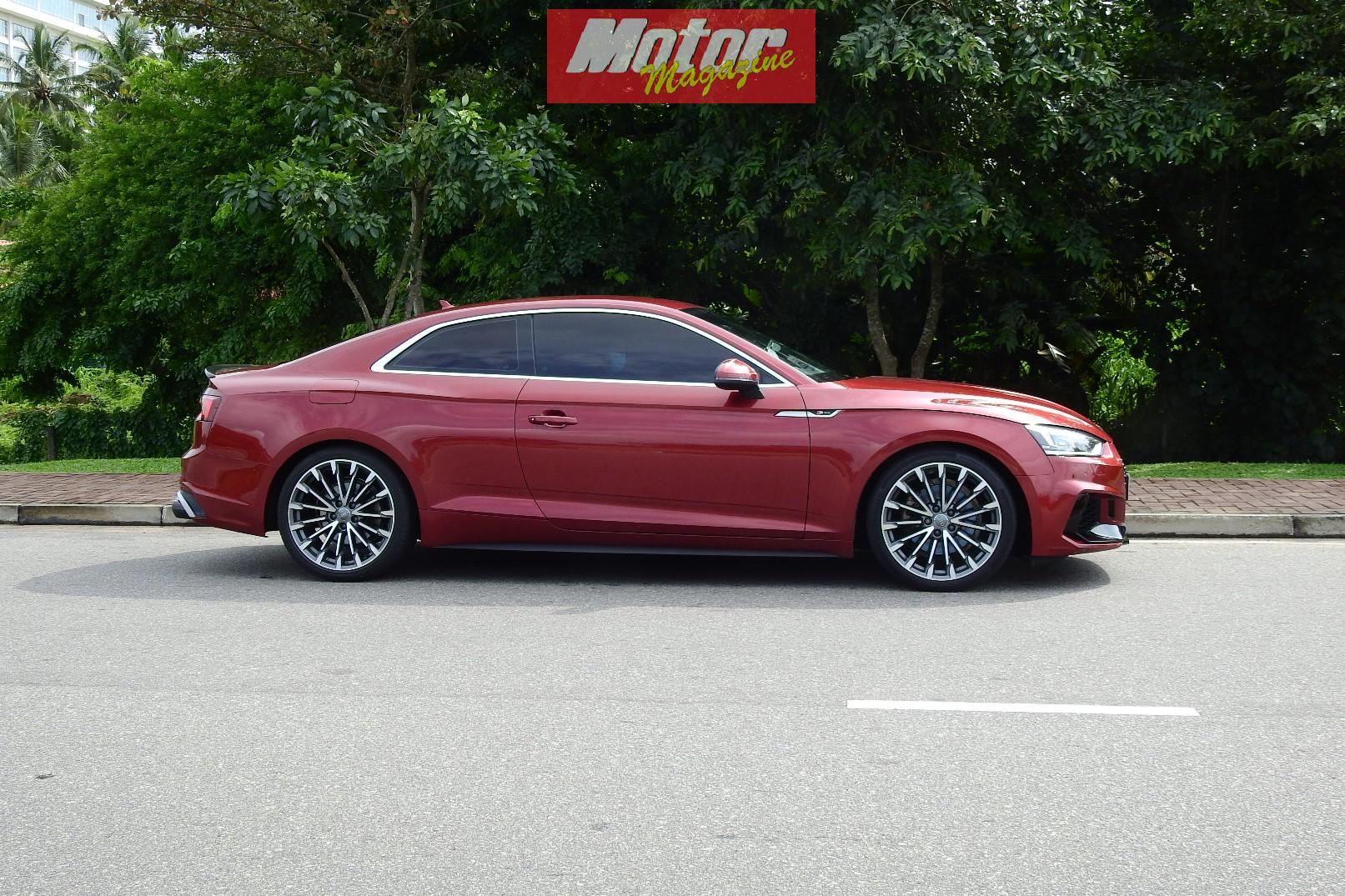 ﻿Of course, you can have your A5 in a rather tasty form, with a 2.0L turbo four under the hood, or even in banzai RS5 guise with a 2.9L turbo V6 that’s shared with the Porsche Panamera 4S (Audi and Porsche are both owned by Volkswagen Audi Group in case you didn’t know), spits out 444hp and sends you to hundred from rest in under four seconds. However, we Sri Lankans have always been cursed in terms of ridiculous duty structures on engine capacities that have firmly ensured that such pleasures are denied to those who would be able to enjoy them in other countries. In fact, right now, we are even denied the relative ‘pleasure’ of uninterrupted fuel supply to run what we already have! 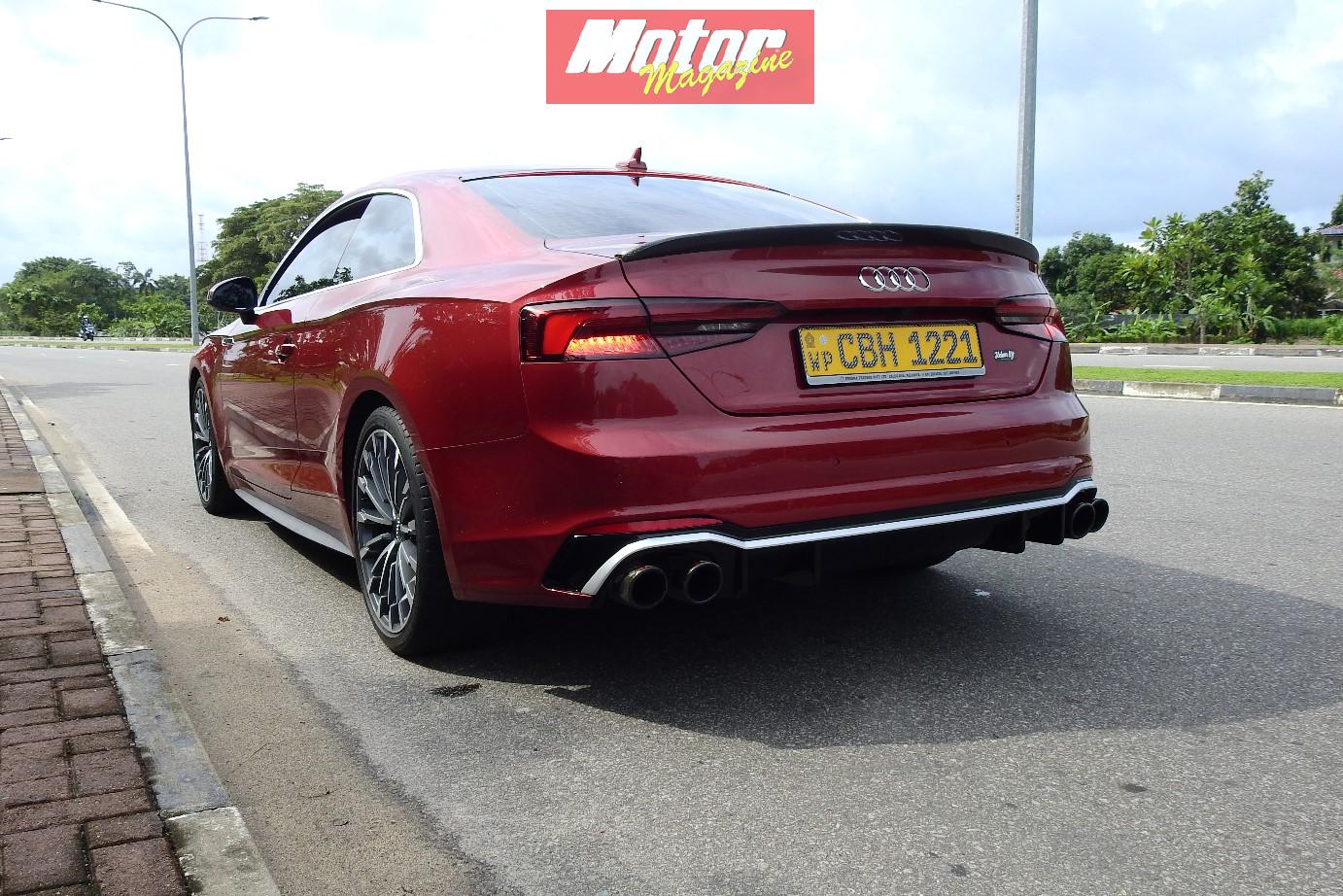 ﻿So, thanks to our brilliant policymakers, this stylish coupe that should be having at least a 2.0L turbo four beneath its hood, propelling its Jakob Herzel-designed lines in a befitting manner, is instead racked with a1.4L EA211 series turbocharged engine that puts out 148hp and 250Nm to the front wheels via a seven-speed Audi S-Tronic dual clutch automatic transmission. And you know what, 148hp just isn’t good enough for a car of this ilk. 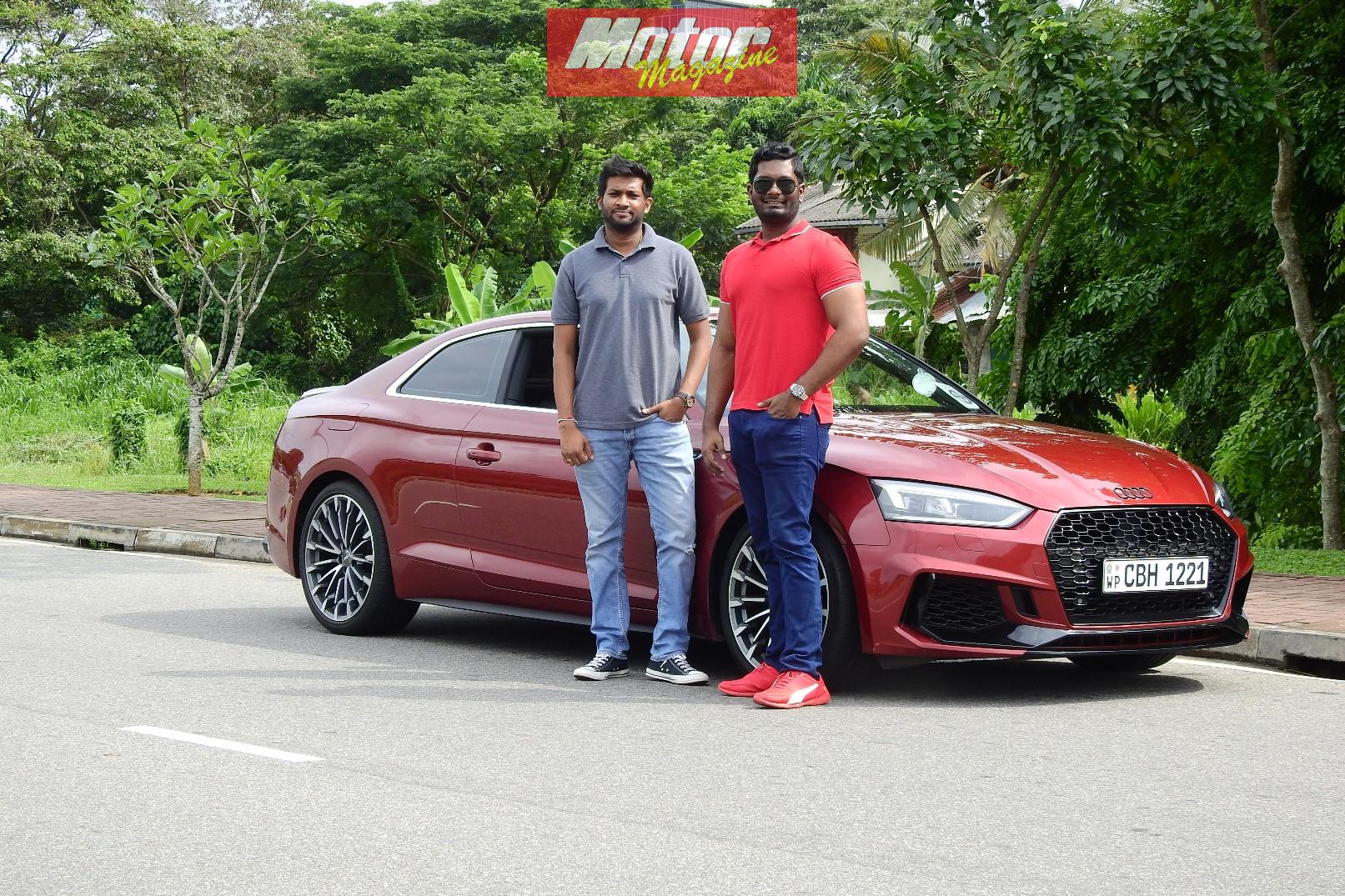 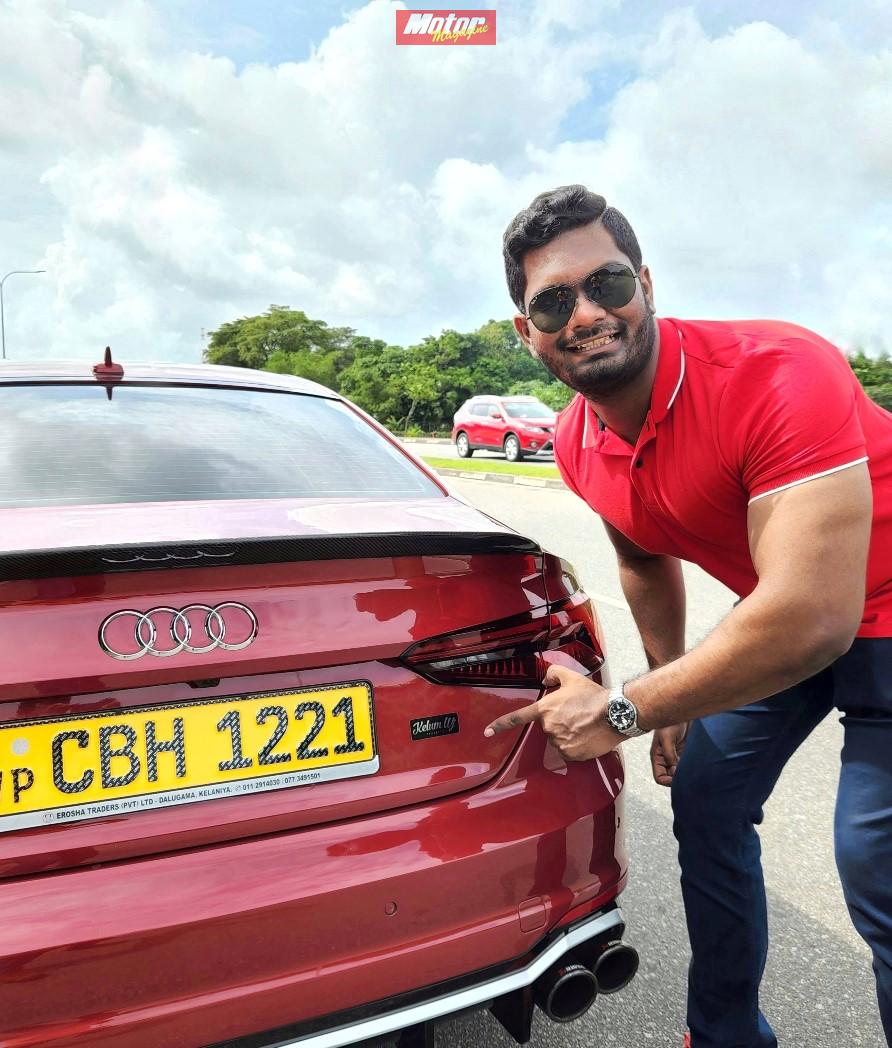 ﻿That’s what owner Dinal Attanayake was thinking too and sent it off to Kelum Wijayawardhana (who we’ve featured before) to do some fettling. With a custom designed intake and exhaust, as well as a custom ECU tune, a modest gain in power has been realized, but that’s not the only benefit. The previous dip in torque at low revs has been smoothed out and the drivability at low speeds has been improved. 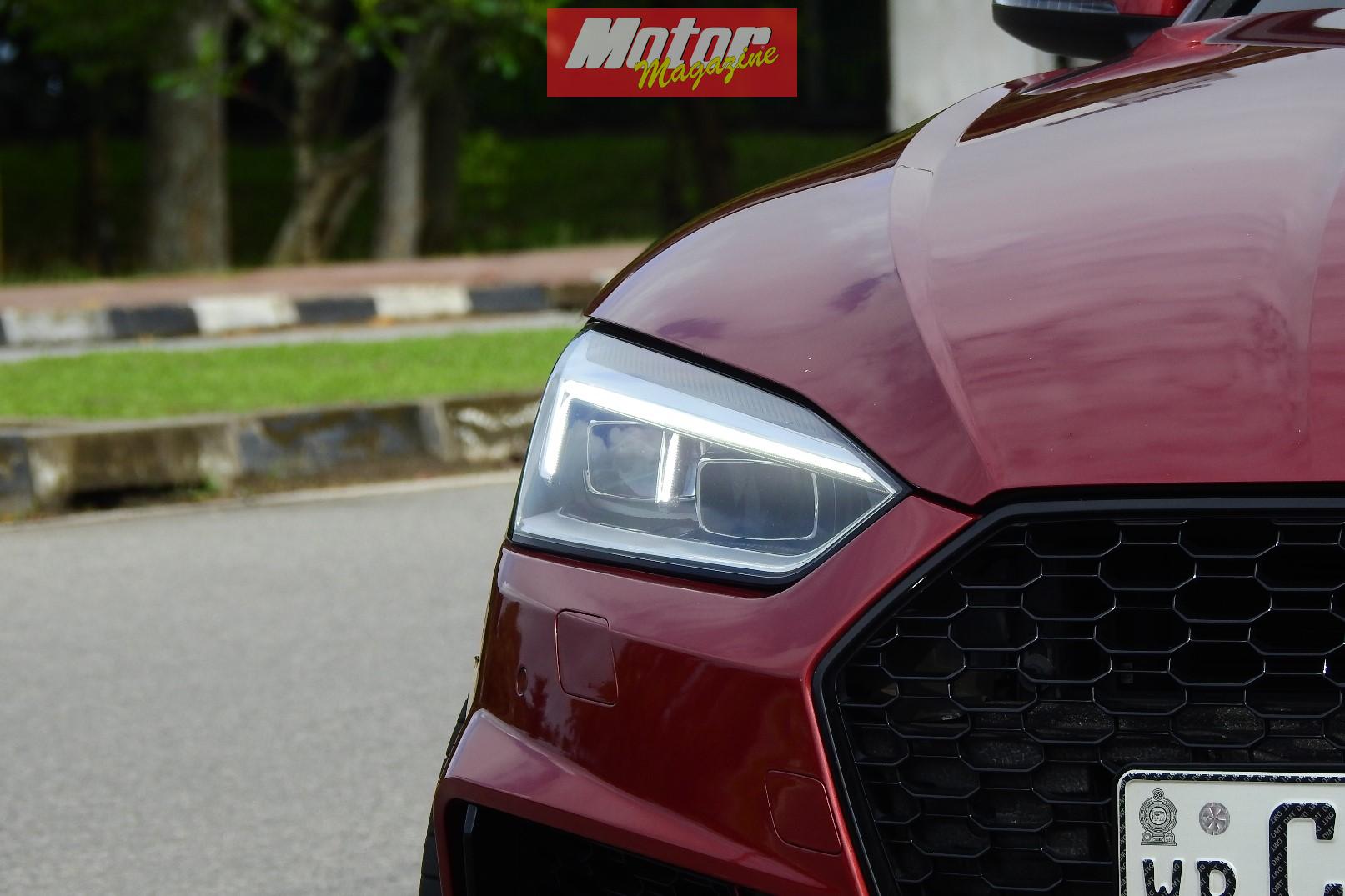 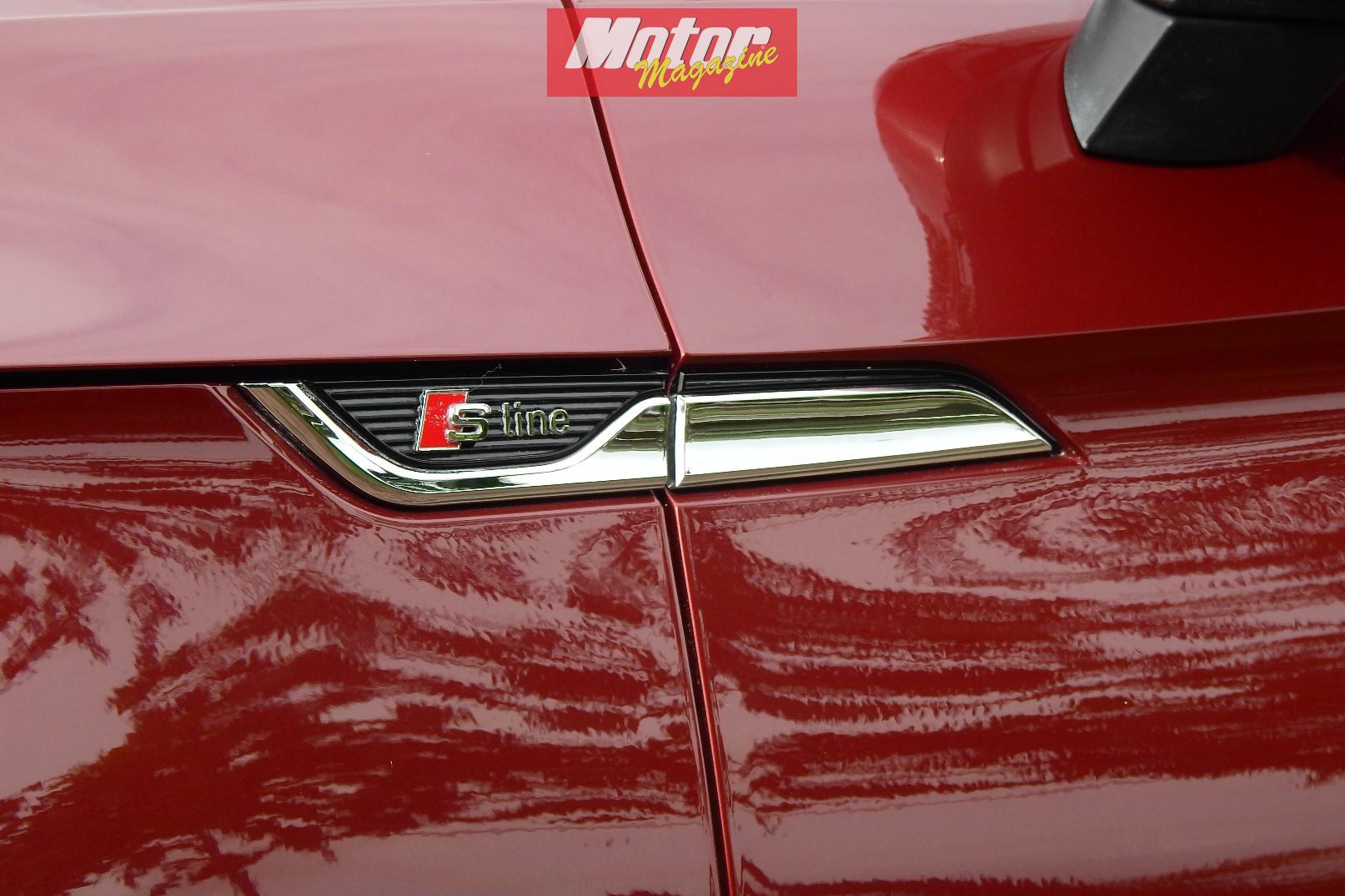 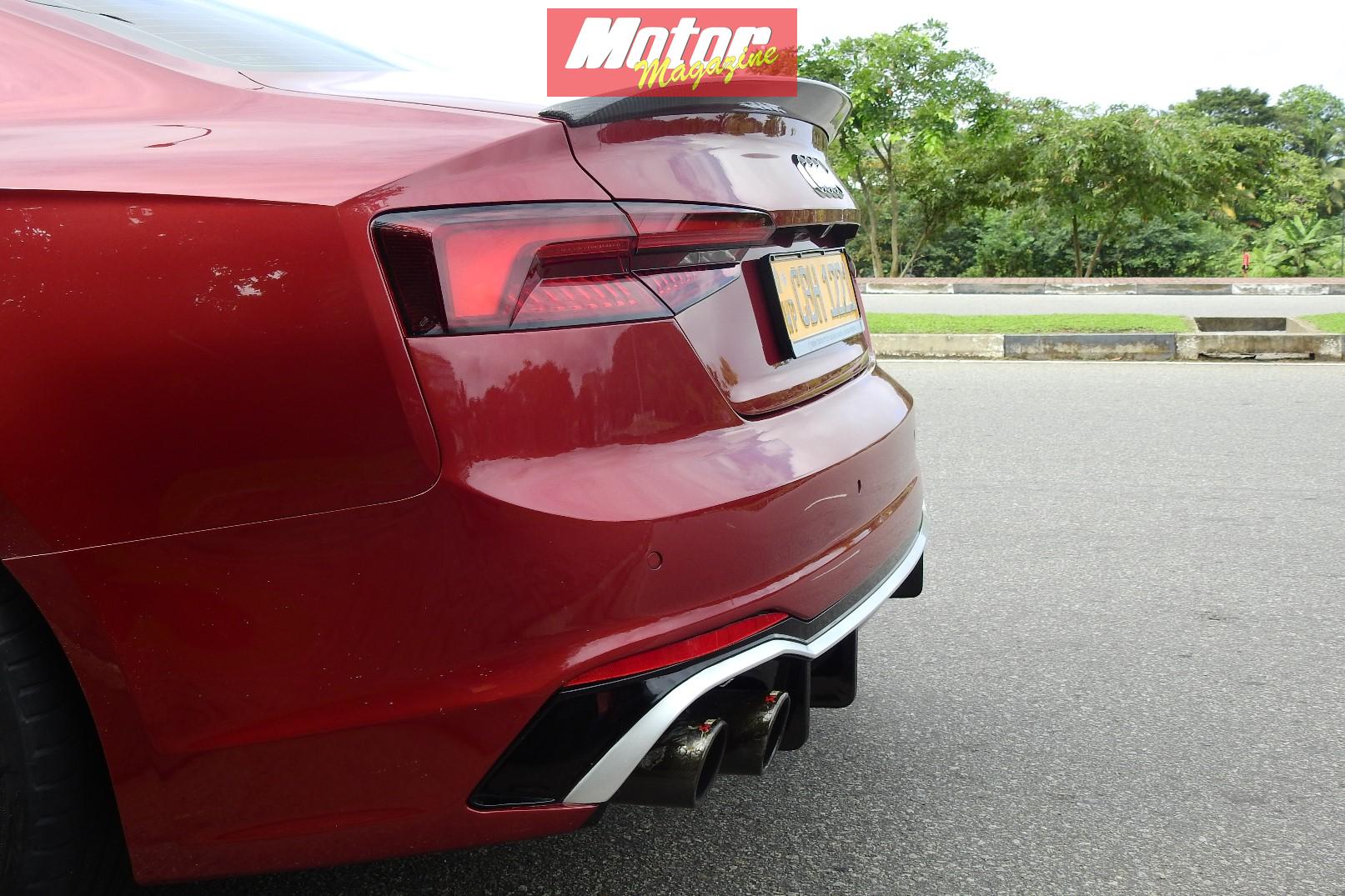 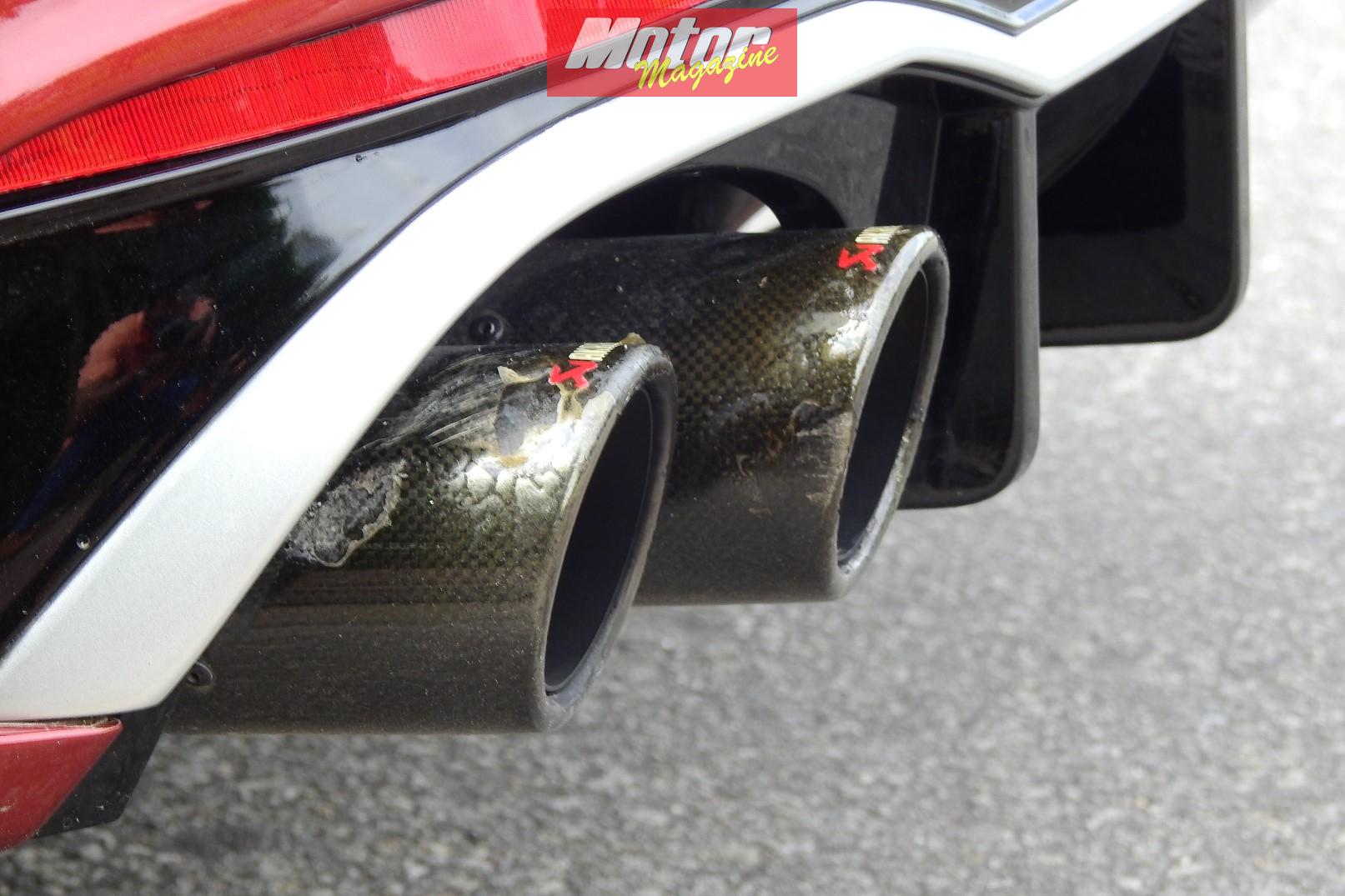 ﻿Wearing a Matador Red Metallic suit, this A5 stands out from the crowd, and as you get closer, the carbon fibre lip spoiler and quad Akrapovic exhaust tips draw your eye towards them, as they emanate a nice low burble. The A5 is a fairly spacious car for Sri Lankans, and four adults can comfortably travel in it. Rear seat passengers even get their own climate zone! There’s a decent infotainment system, Audi Virtual Cockpit, Audi MMI Navigation Plus, Audi Parking System Plus, cruise control wireless phone charging and all the tech toys you’d expect from a mid-tier German car. The boot is a spacious 454L affair too, and a couple or small family can use this as their stylish daily driver – remember I’m talking about overseas, as in Sri Lanka, we might have to use bicycles very soon when there’s no petrol or diesel – I’ve already cleaned and serviced mine in anticipation of ‘B-Day’. 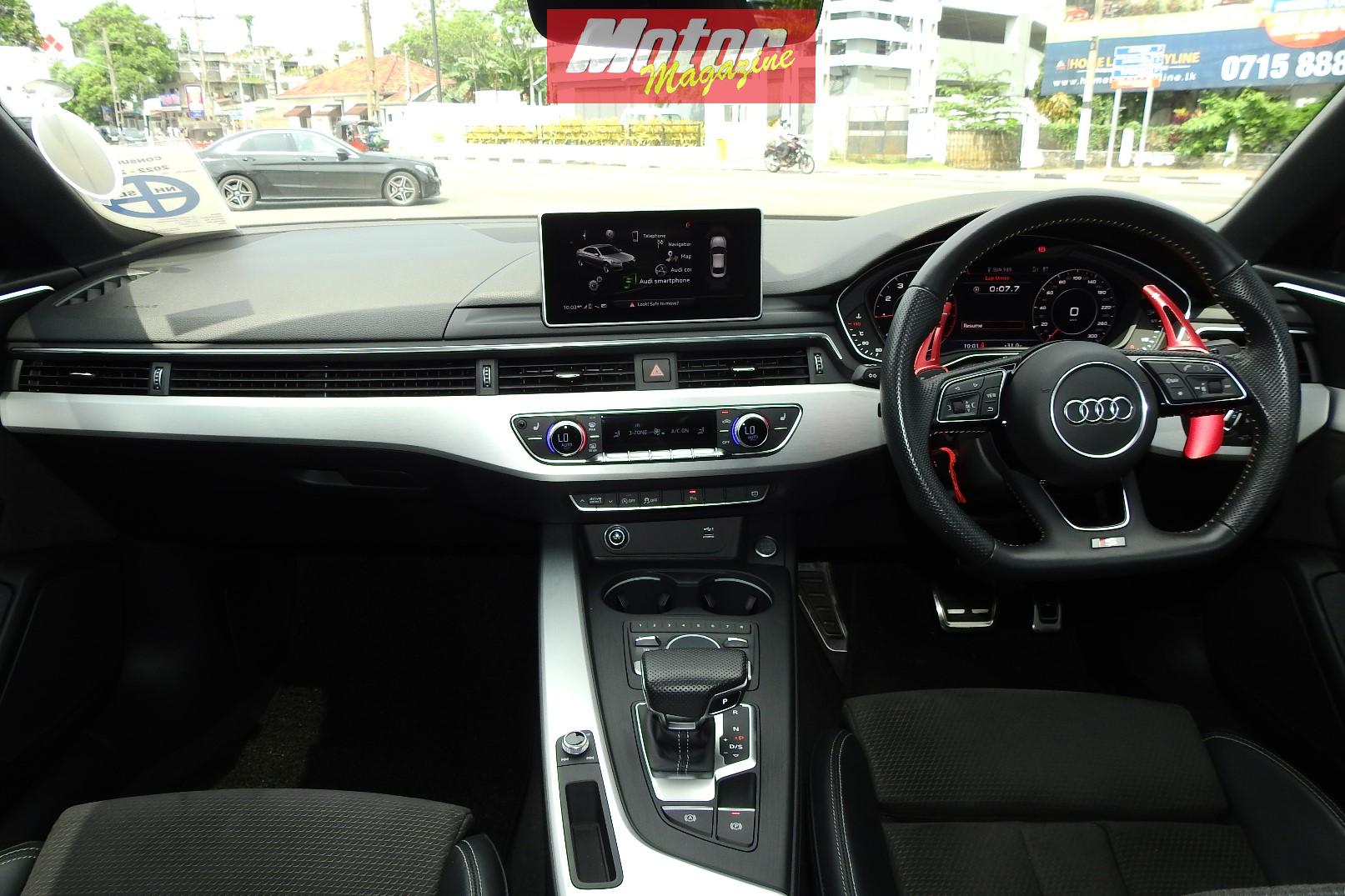 ﻿Anyways, might as well enjoy cars while we still have petrol to drive them with, and I waste no time in accepting the keys proffered by Dinal and settle into the driver’s seat. Kelum’s tuning has been to improve drivability as a whole, not turn this car into some finicky bucking bronco that strains at its leash, and it’s very friendly to drive as a result. You do notice the extra torque at low to mid RPMs as a small prod of throttle is required to overtake dawdling vehicles, and the capable dual-clutch gearbox goes about its business unobtrusively. The only hint of things happening is the exhaust note rising and lowering in crescendo. 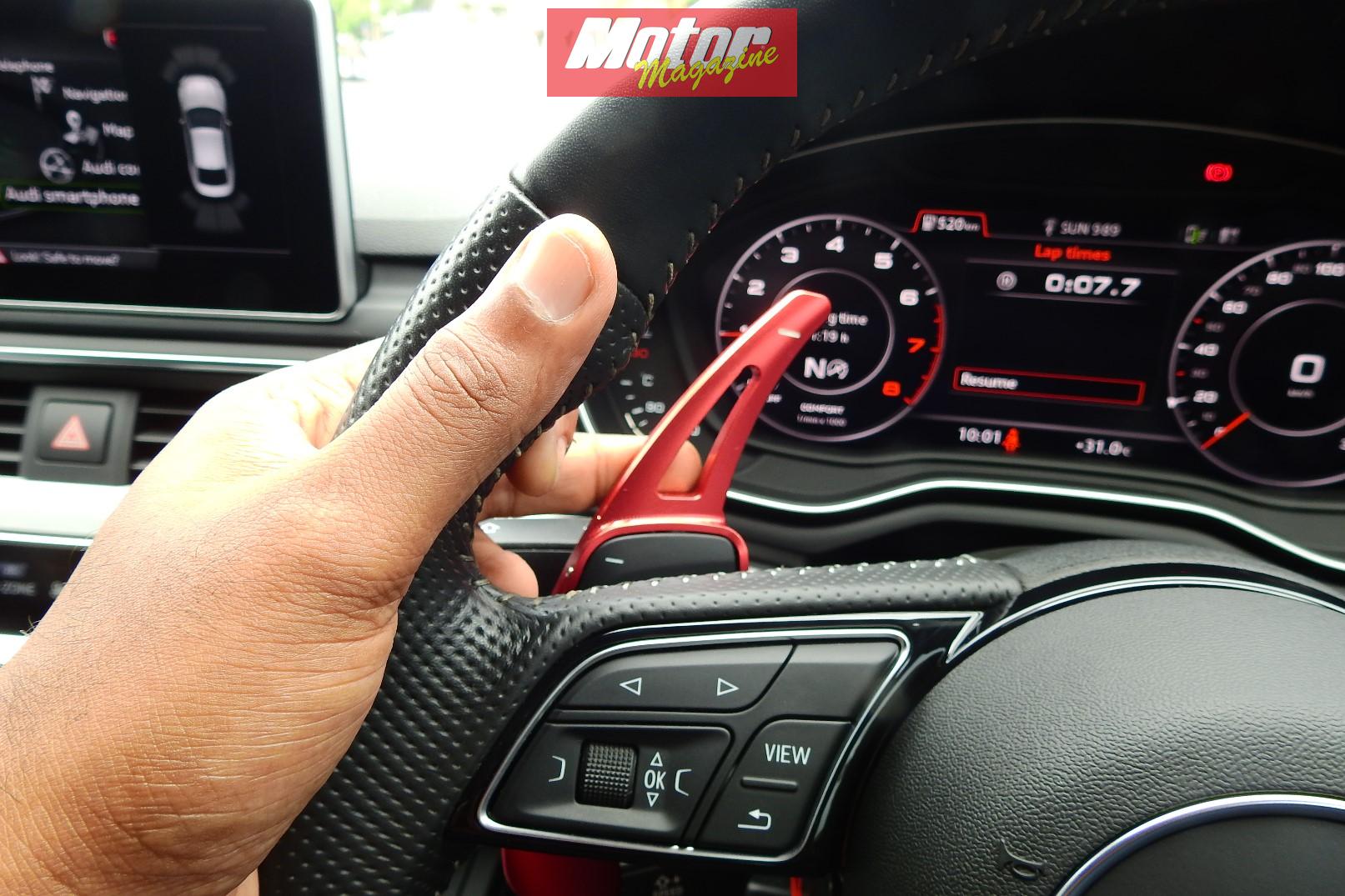 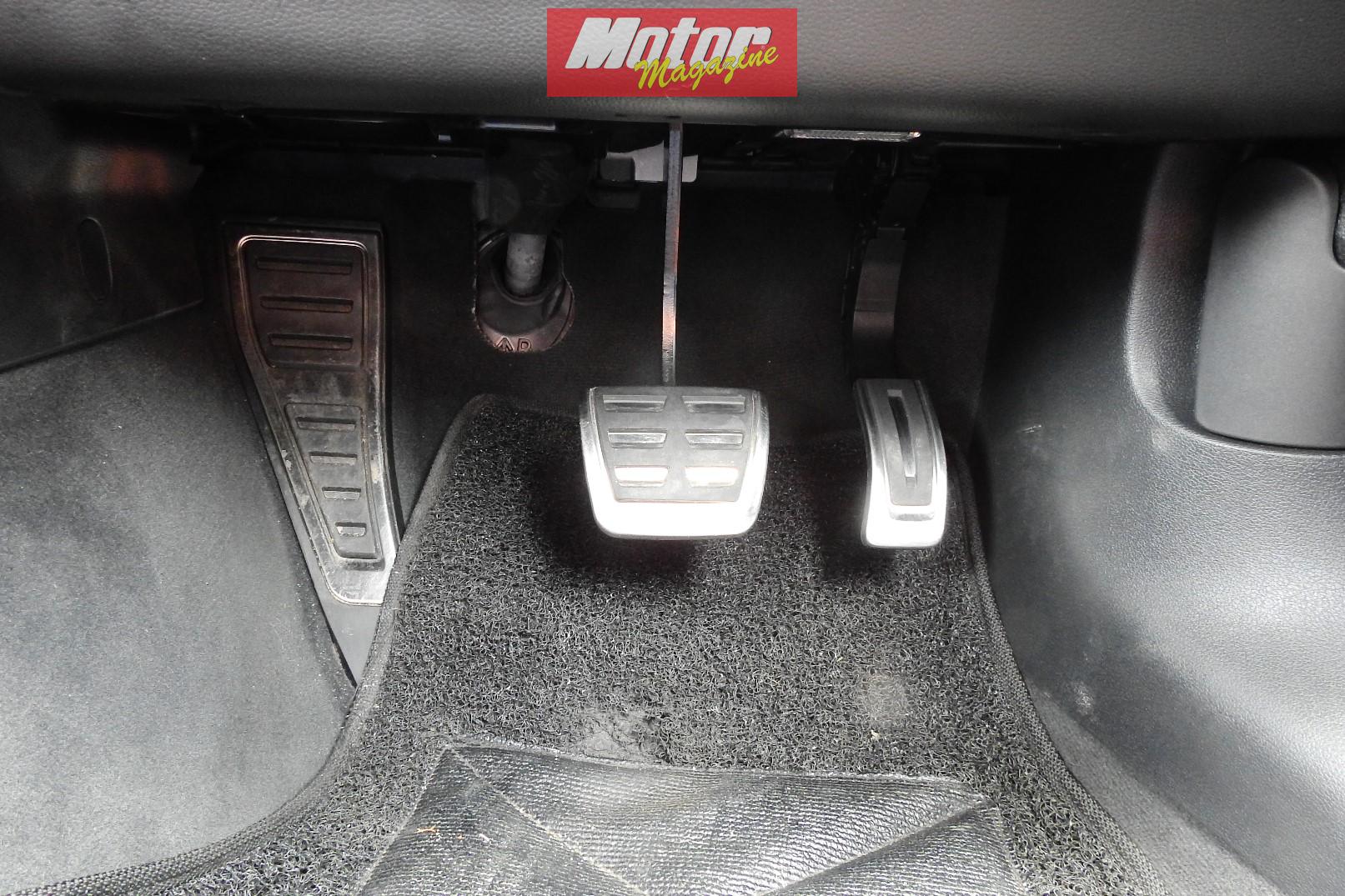 Arriving at a nice open road with a good surface and ample traction, I finally switch it into Dynamic, turn off the traction control and give it the beans. The benefit of the tuning is immediately noticeable, as I grab every gear with the red paddle shifters as the revs head towards the 6k mark, the exhaust singing a glorious song, with burbles and hints of pops escaping on upshifts. Reaching a long sweeping corner, the well-planted nature of the car encourages me to keep my right foot planted as the speed crests triple digits and the car stays straight and true. You can definitely feel that this has more than 148hp! 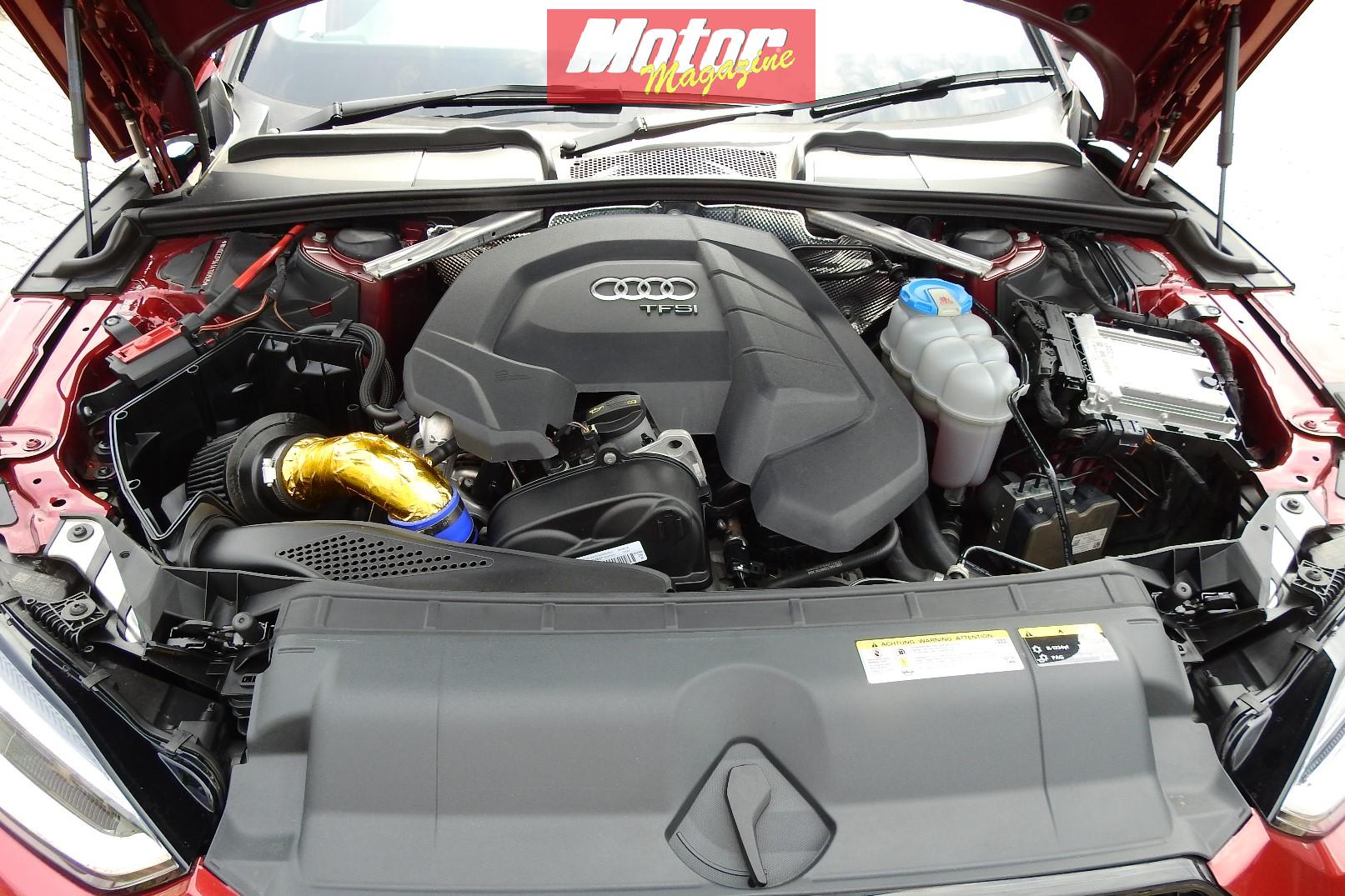 ﻿The stock zero to hundred sprint is rated at 8.7 seconds, and Kelum hazards a guess that it’s in the sevens now. I’m inclined to agree. It does feel like a mid-seven kind of car. The brakes haven’t been touched as they’re deemed adequate for what is effectively a Stage 1 tune, and I have to agree; they hauled the car down from triple digits whenever required with nary a protest or wiggle, helped by the Continental tires. 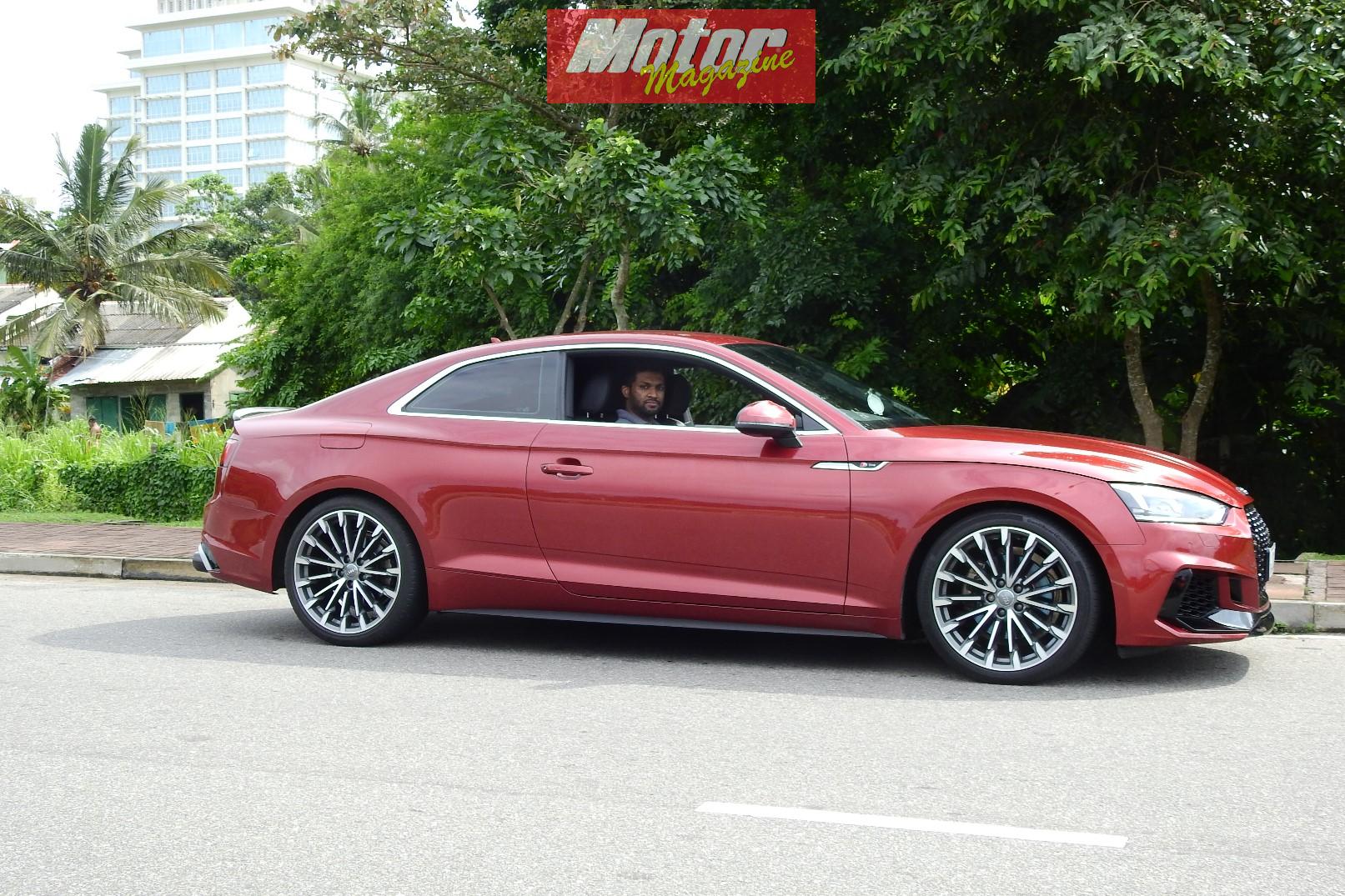 ﻿Dinal absolutely loves the car post-tuning and laments the fact that the current economic crisis and resulting shortage of fuel, especially the premium 95-octane stuff that is required by newer European cars, means that he has to mostly use his family’s Toyota Aqua for commuting. He says that fuel economy hasn’t dropped after the tuning, and he can squeeze out 10km/l with a careful right foot – but that’s sort of a catch-22 situation because the tuning and exhaust goad you into planting your foot, resulting in those figures dropping. Miles, or smiles per gallon. 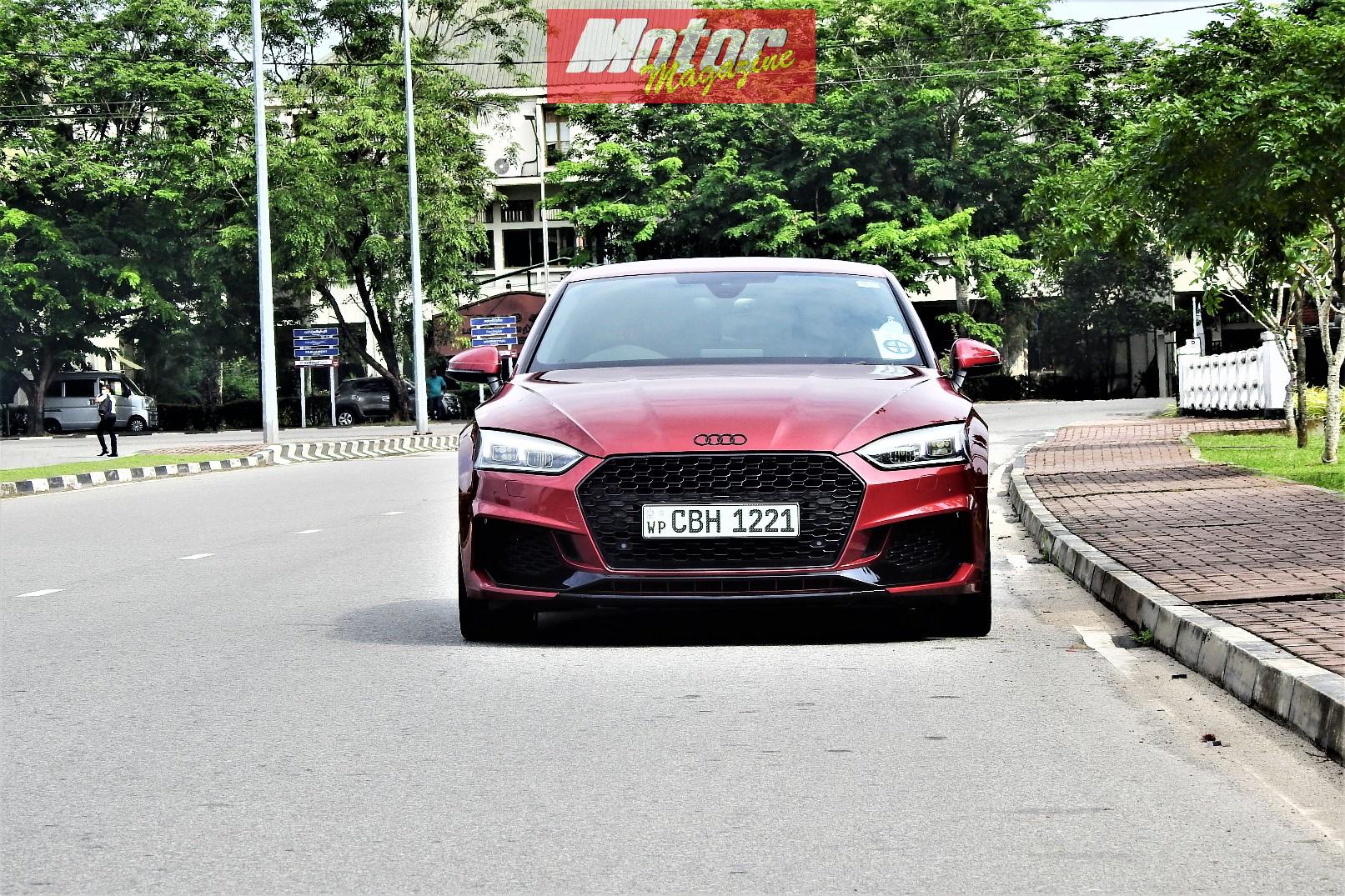 ﻿Since the import ban on new cars came into effect in 2020, we haven’t seen many new cars enter the country, save for those imported by embassies. In fact, I’d hazard a guess that the US Embassy’s Toyota Land Cruiser 300 is probably the most Instagrammed new vehicle out there – and if there’s anyone from the US Embassy reading this, we’d really love a chance to feature it! With Sri Lanka effectively stuck in 2020 in terms of cars, avenues such as customization and tuning offer petrol-heads a way to get their fix – and even then, it’s an increasingly expensive fix thanks to skyrocketing exchange rates. Nevertheless, we are always on the hunt for interesting cars and stories to feature, so do write to us if you’ve got something. Despite all our troubles and tribulations, Sri Lanka’s car culture is truly something to be proud of!