On 9th July 1985, the first Proton Saga entered the Malaysian car market. The brainchild of Dr. Mahathir Mohamed, then-Minister of Trade and Industry, he envisioned a national automaker for Malaysia, and Proton was born. The Saga was its first product, based on the 1983 Mitsubishi Lancer Fiore, and starting a long relationship with Mitsubishi. The Saga, and Proton in general are a symbol of pride for many Malaysians, as the company enjoyed eight years of being the sole national automaker before Perodua entered the scene in 1993. As a child in the early 1990s, I have memories of seeing a blue Proton Saga parked in the then-Ramada Renaissance Hotel (now Cinnamon Lakeside) carpark, where my father worked at the time. The car belonged to the Malaysian chef employed at the hotel, who chose to import and drive a symbol of his nation’s pride during his time in Sri Lanka. 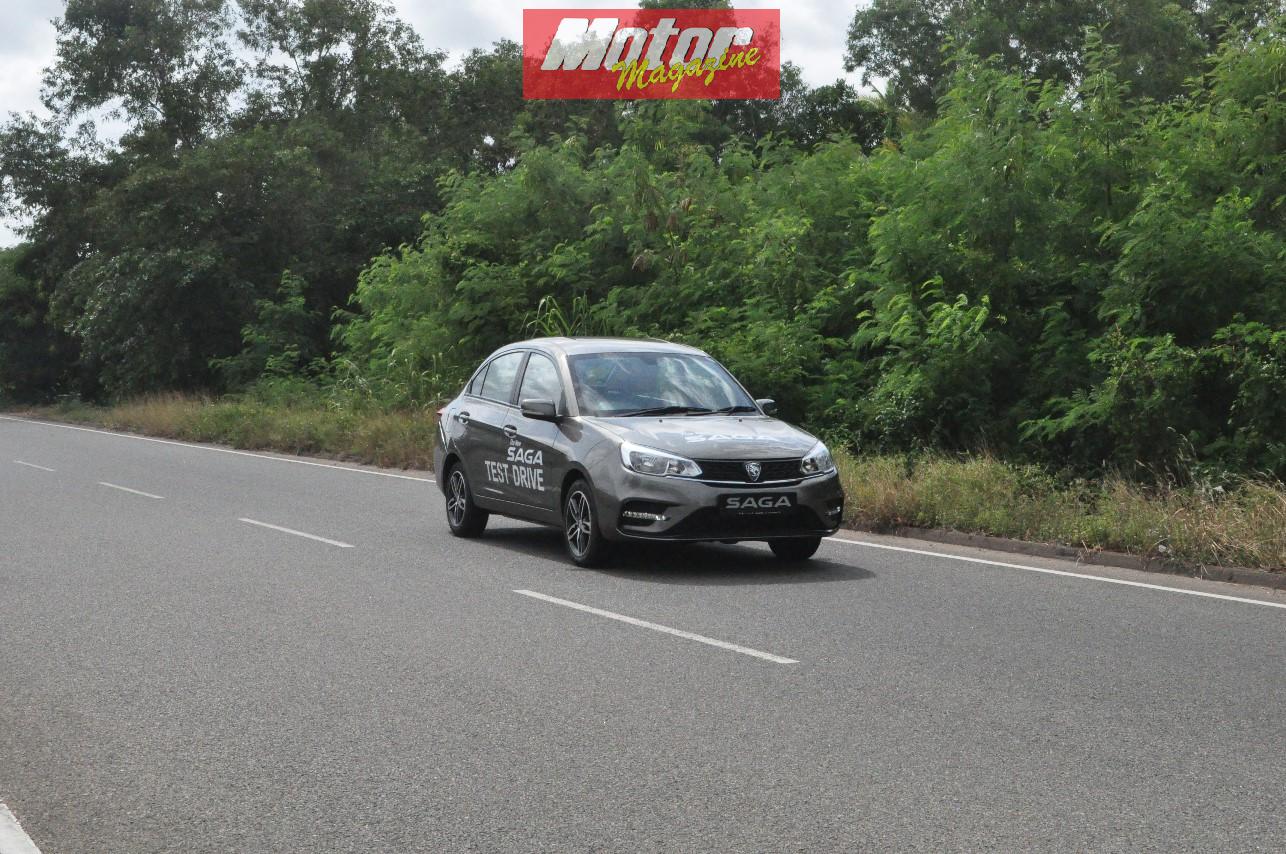 ﻿Perhaps it is apt, then, that Micro Cars Ltd who have trail-blazed their own path in the Sri Lankan automotive assembly scene should be assembling the Saga at their Polgahawela factory. Proton is now majorly owned by China’s Geely, and Micro Cars have been representing and assembling Geely products for aeons now (the Panda, for example). We at Motor were lucky to be granted this drive of a pre-production locally assembled Saga with just 6km on the odometer at the time of testing! Micro graciously didn’t place any mileage limit on testing this car, and we were able to clock in around 60km of testing under city and expressway conditions, which is positively luxurious when we’ve faced test vehicles in the past that we had to keep under 15km! You can read my article on the Motor website about test driving cars in Sri Lanka for a further glimpse as to how we do it. 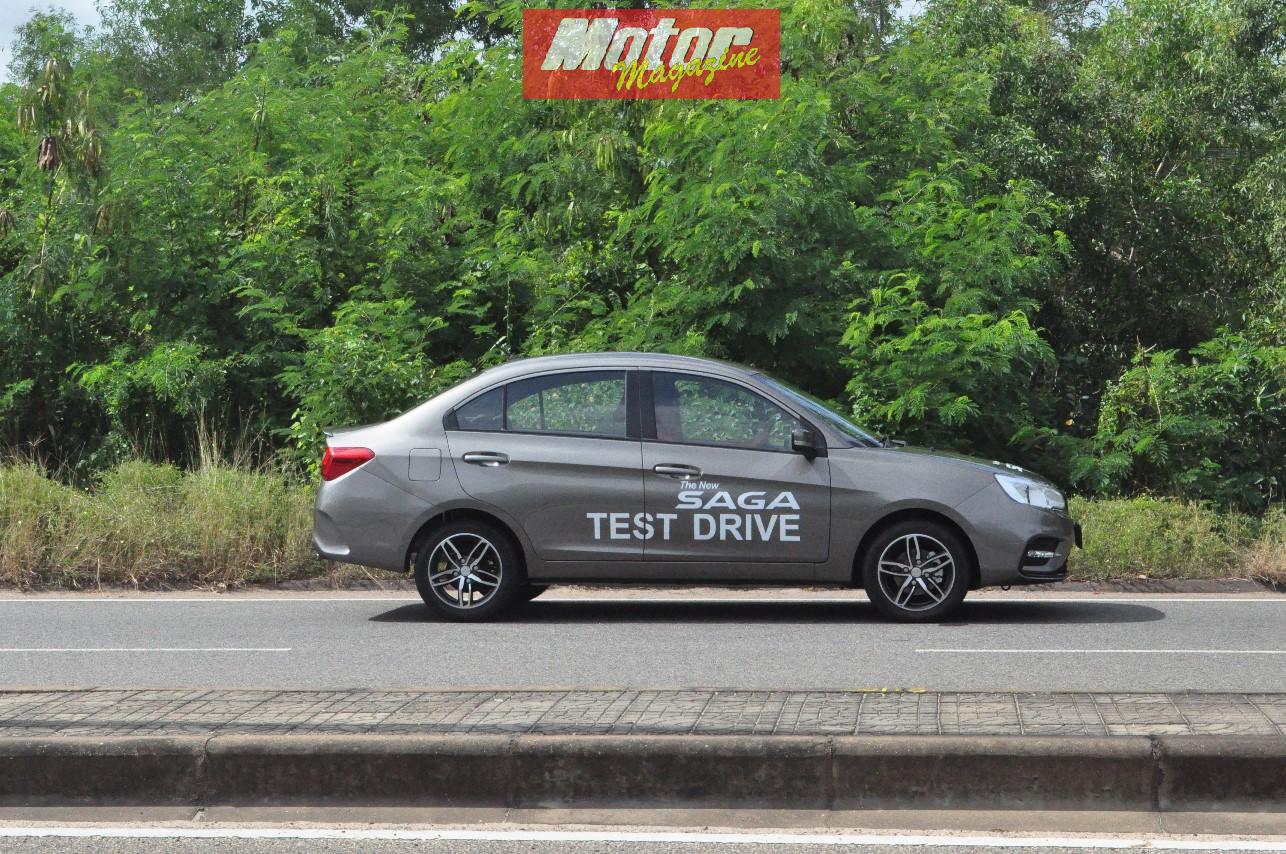 The design of this third-generation Saga dates back to 2016, albeit with minor facelifts over the years. Classed as a subcompact car, it’s got a 2.47m wheelbase, and an overall body length of 4.33m, giving it significant front and rear overhangs. The kerb weight is a sprightly 1,075kg for the automatic variant which we are testing here. Rolling on 15-inch rims shod in locally produced Ferentino rubber, it’s your typical three-box budget sedan shape. Headlamps are halogen units, with the only LEDs being the DRLs in the front bumper. The rear lamps use conventional bulbs too, and there’s a tiny lip spoiler on the boot lid. 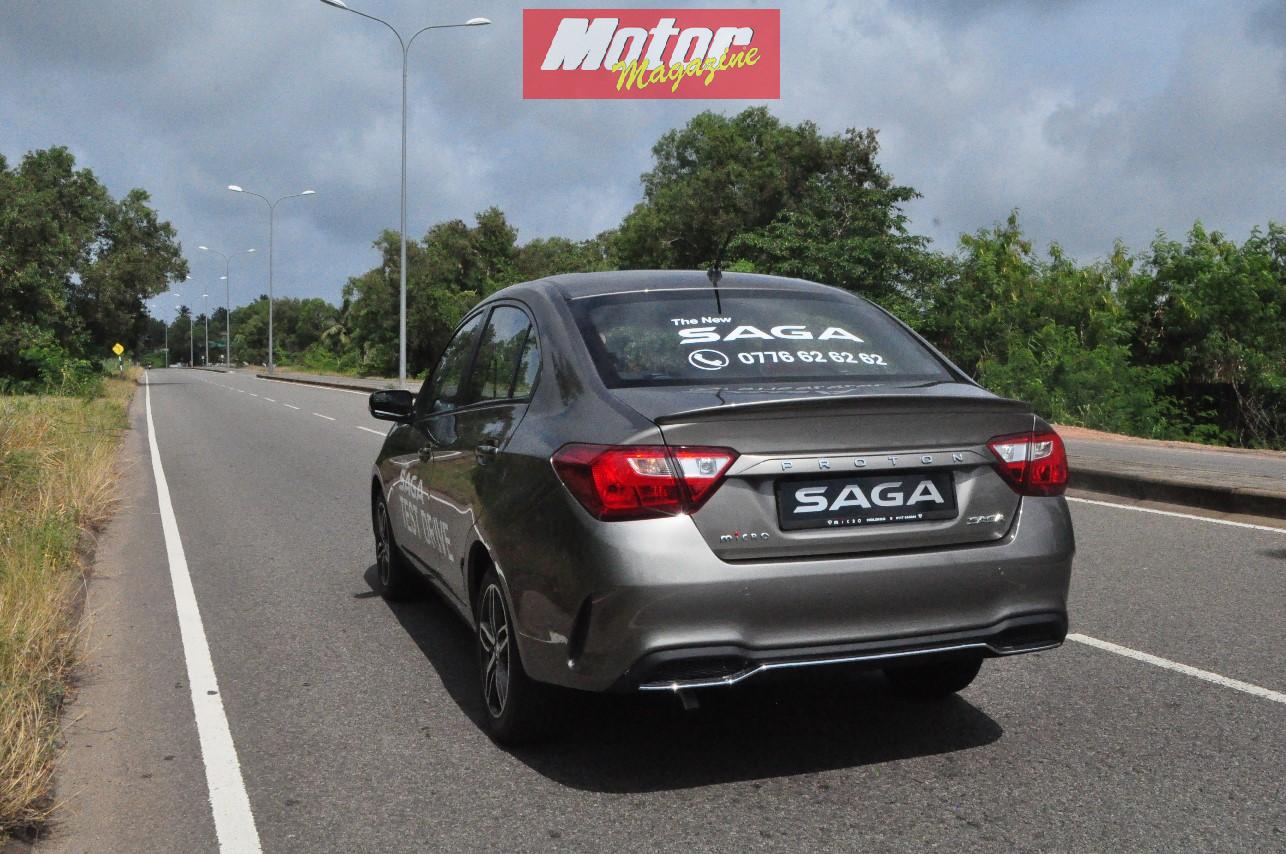 ﻿Remember that the Saga is meant to be wallet-friendly, and retails for under RM 40,000 in Malaysia, so you shouldn’t expect it to look like a premium luxury sedan with a myriad of curves, angles, chrome, and large wheels. In terms of local assembly, I feel that overall, the Micro team have done a good job, and even the locally administered paintwork looks and feels up to the mark.

﻿Proton’s S4PE powerplant lies beneath the hood. Displacing 1.3L, the four-cylinder DOHC petrol-fed mill enjoys variable valve timing on the intake side, and puts out a decent 94hp at 5,750rpm with 120Nm at 4,000rpm. Drive goes to the front wheels via a four-speed Hyundai-derived automatic gearbox. Interestingly, the third-gen Saga launched with a Punch Powertrains CVT but reverted to the 4 speed autobox in 2019 due to shortcomings that included jerky behaviour in traffic, and consequent customer feedback. Braking is via front discs and rear drums, the steering employs hydraulic power assistance, and a peek at the underside reveals a MacPherson strut front and torsion bar rear suspension set-up. Tried and tested technology here. 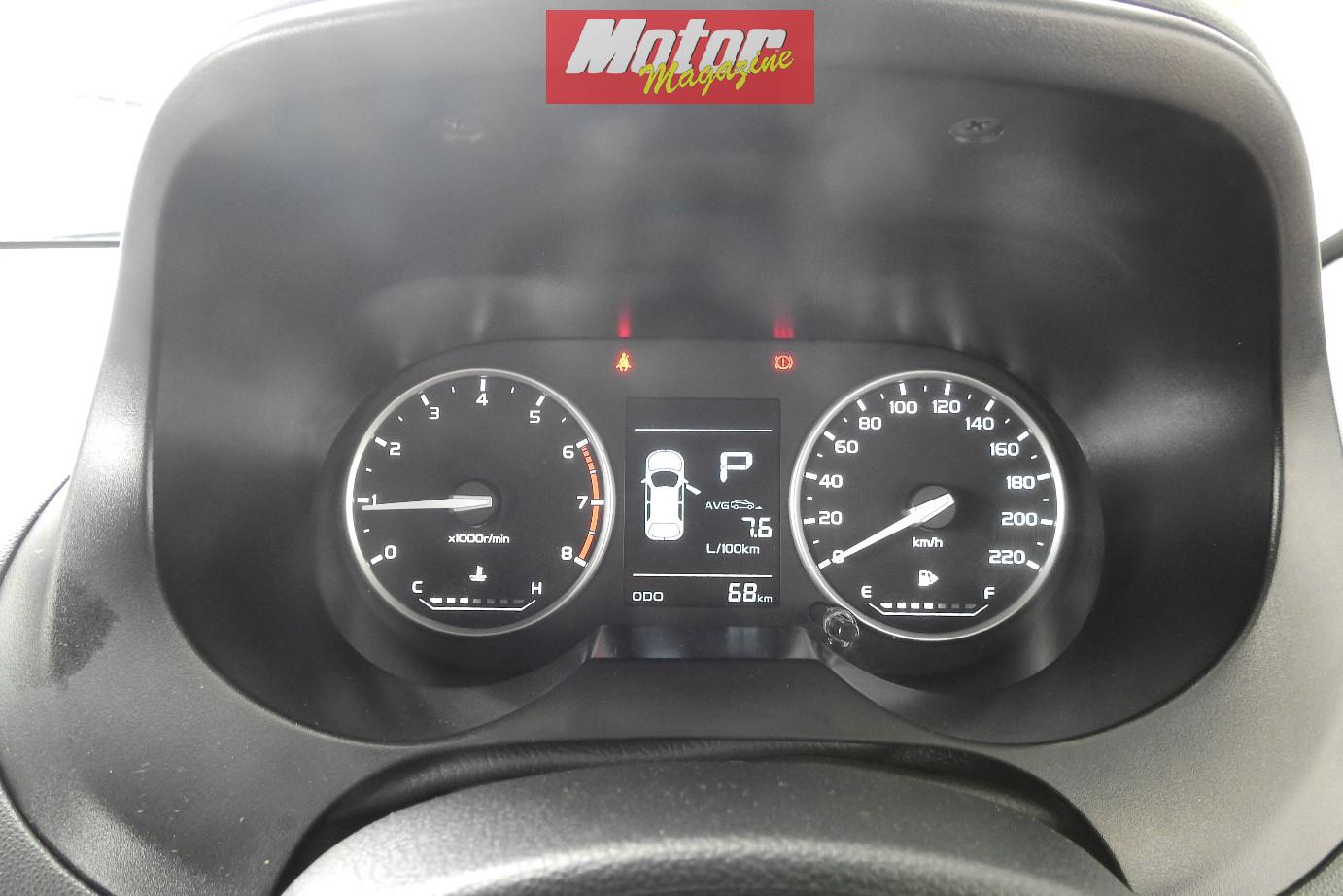 The driving position is pretty conventional. You don’t think twice about it. You’re not sitting bathtub-style in a purpose-built racer, nor are you in a lofty SUV sitting on top of other cars. Taking a glance around reveals that everything you need falls to hand. Pop out the key from the switchblade-style fob, insert it into the lock barrel, turn it, and the engine fires up. There’s a blanking plate for a push start button, so that’s an option somewhere. 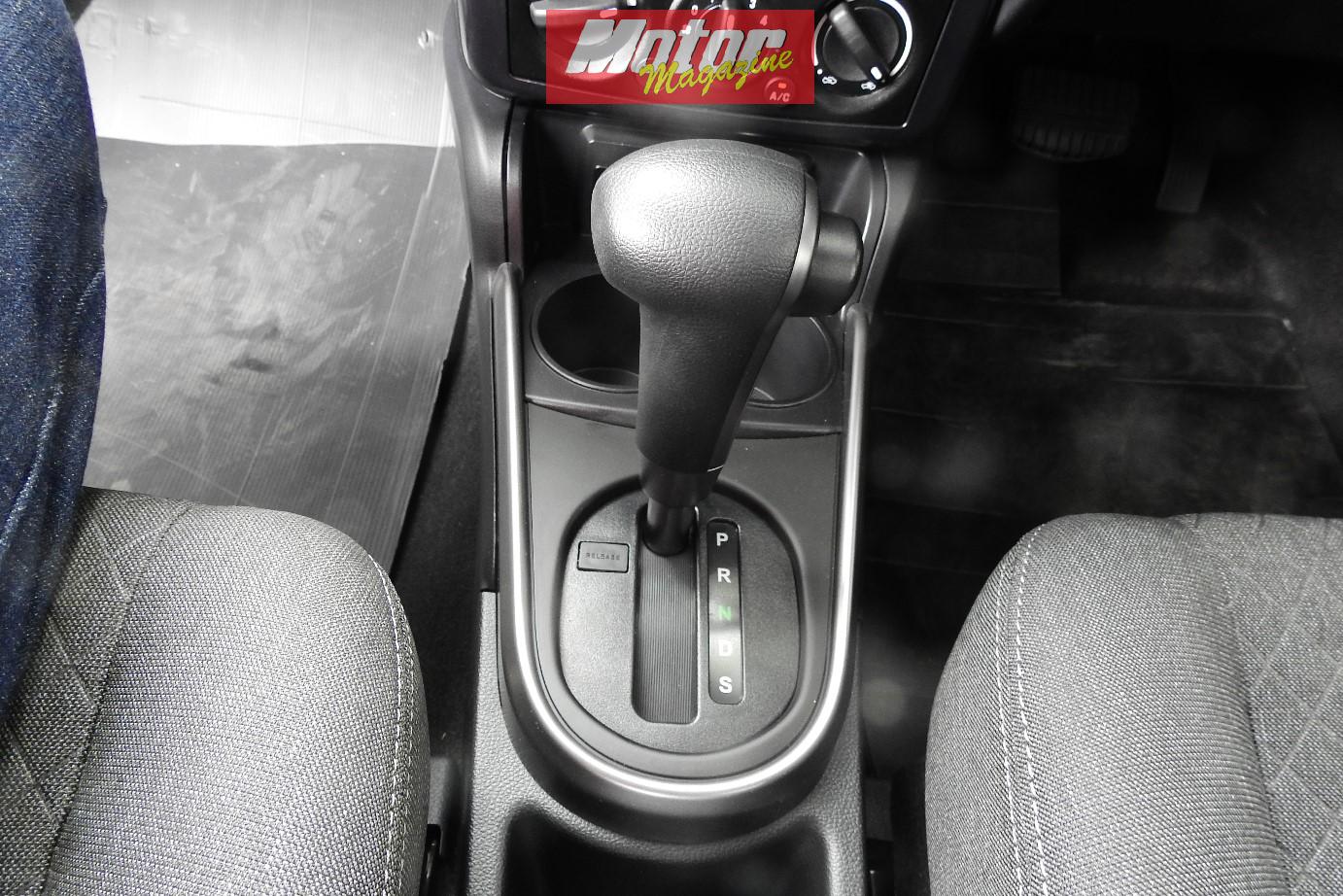 ﻿Foot on brake, move the shifter into D, exert some pressure on the throttle and away it goes. First impressions on this admittedly box-fresh car with just 6km on the odo is that the engine willingly revs, but the transmission shifting programmes need a bit of tweaking. The overall set-up is geared towards economy, as evidenced by the eagerness of the box to shift to higher gears and stay there as long as possible. This makes overtaking a planned, rather than ad-hoc affair.

As we drove along, I noticed the transmission starting to ‘bed-in’ and become a bit more responsive. On a lonely road with no other vehicles around, I was able to time 0-100km/h taking 14 seconds, which is about what Proton cites. Top speed is said to be 170km/h, which I didn’t test of course. There’s also an ‘Eco’ light to signal when you’re driving economically. The steering is a bit weightier than your typical Japanese vehicle, which is rather nice, as, coupled with the firmer suspension, makes for some surprisingly competent handling, certainly not what you’d expect in this segment. It’s no canyon carver, but you can hustle it if you’re in a hurry. Braking is a similarly competent affair for the purpose, and I had no issues with normal, or quick stops during our fairly long test drive.

﻿Three things I’d like to see Micro add to this car. The first is something that many cars don’t come with nowadays, but would be excellent for our country, and that is auto door locking, preferably as the vehicle starts moving. This will add an extra level of safety to the occupants and their belongings amidst our skyrocketing crime rates. The second would be power folding mirrors. This is useful to keep some drug addict or petty thief from making off with the mirror glasses, although the more desperate simply break off the entire mirror assembly. The third is, to add one-touch automatic operation to the driver side window, as this is a pretty standard feature on most cars. 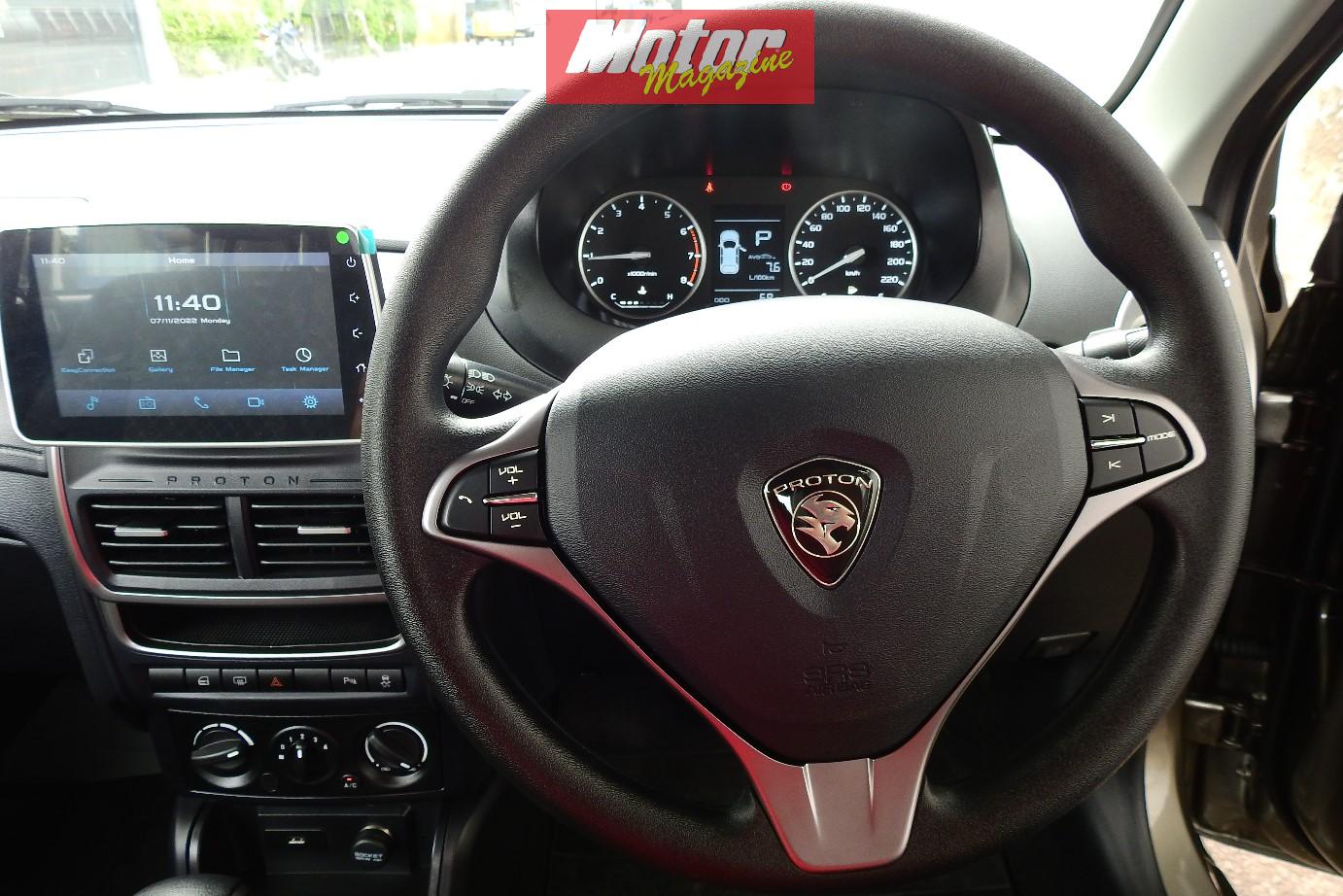 Living with the Saga

﻿Let’s start with the AC. Proton don’t offer a heater on the Saga, so it’s a choice of chilled air, or just air. Cooling is impressive, but it should be, given that Malaysia ’enjoys’ similar relentless heat as us.  During our test drive on a typical hot day we left the fan on 2, cooling control set to maximum, and didn’t face any issues in the front or back seats. 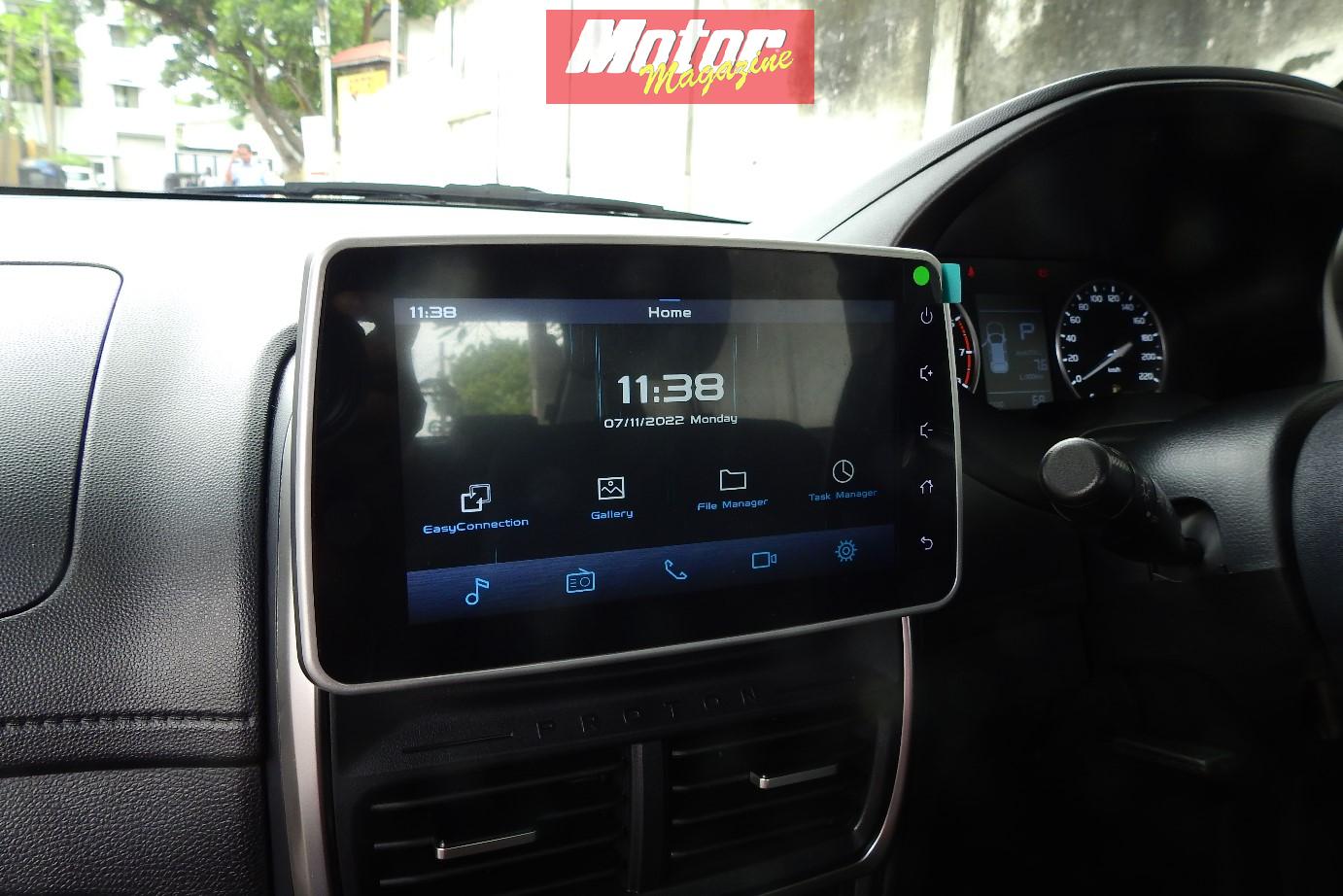 ﻿The infotainment system is an Android-based touchscreen affair set ‘floating’ in the dash. You’ve got radio, phone integration, and USB connectivity via Android Auto. It plays through four speakers, one in each door. Sound quality is basic, and a speaker upgrade is recommended. I suggested that Micro should install the upgrade at the factory itself and mention it in sales literature. 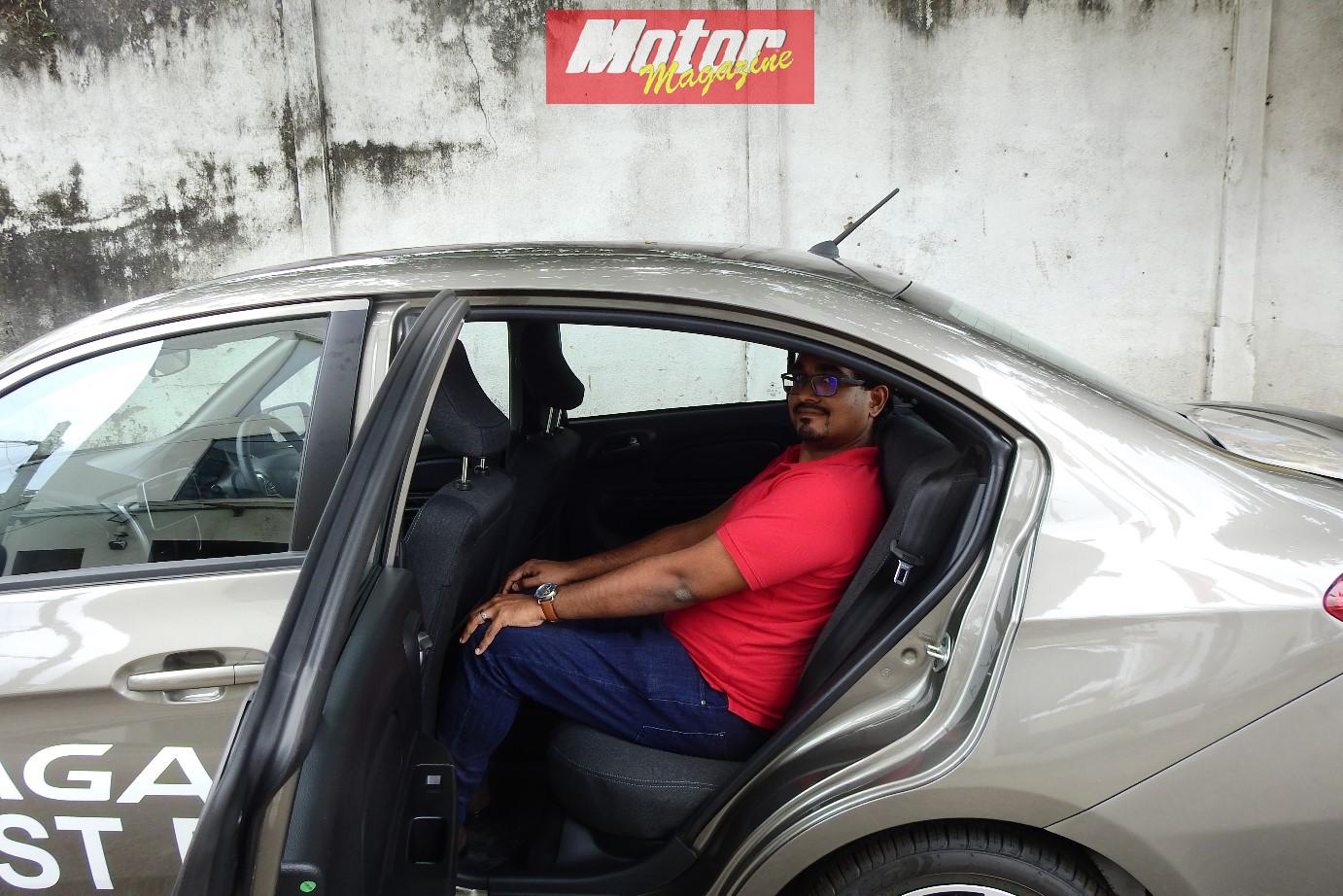 ﻿Headroom and legroom are ample for the class at the front and rear, although the sloping roof means that rear seat passengers of over six feet in height may brush the headliner. The front seat backs are scalloped, aiding knee room for taller rear seat occupants too. The seat cushioning is fairly firm and supportive, with fixed headrests for rear seat passengers. 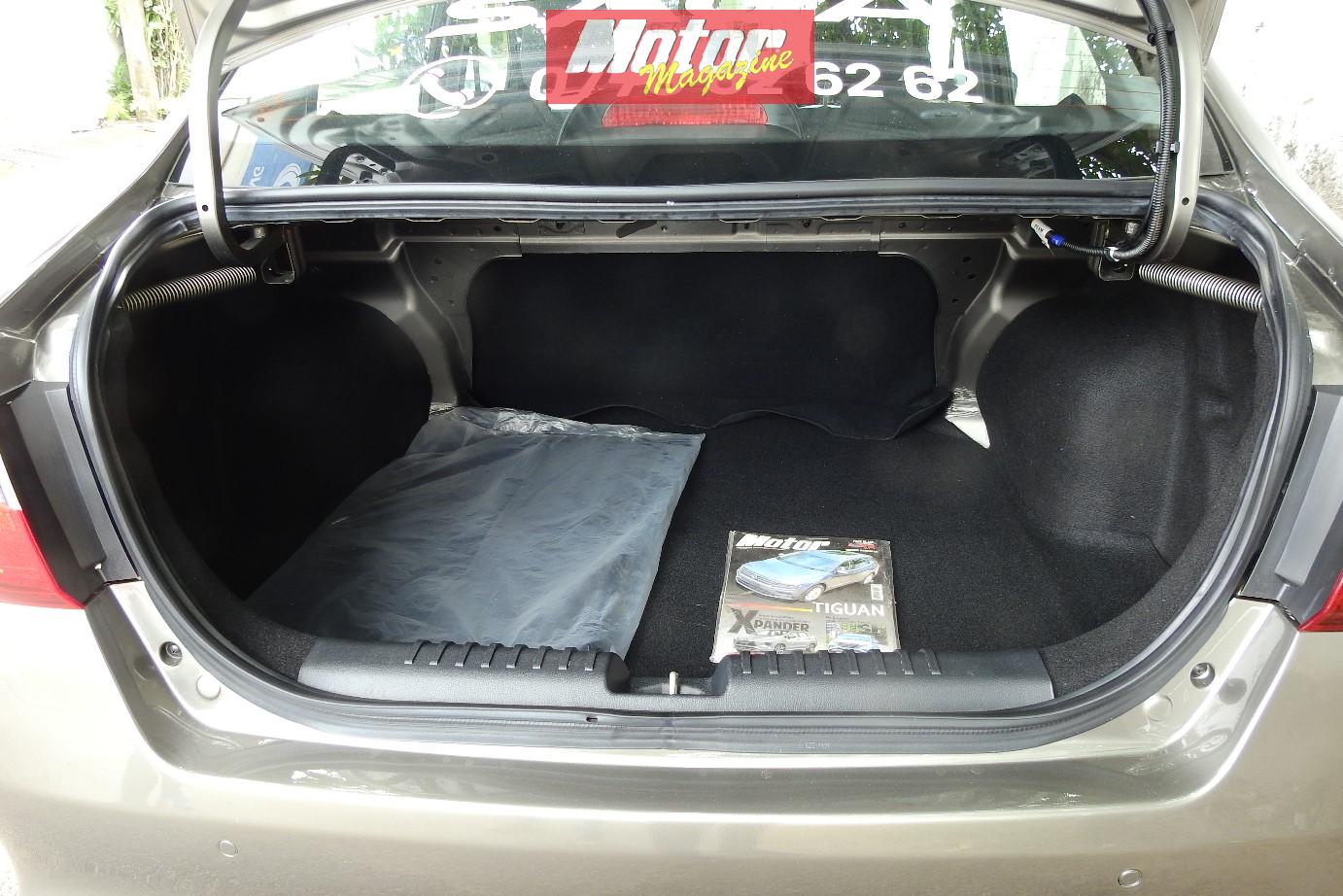 ﻿The glovebox is quite small, but you’ve got some open storage areas around the cabin, as well as two USB charging ports for rear seat passengers, once again highlighting the suitability of the Saga for tourism. But what really sells it for touring, is the 420-liter boot which is regularly shaped and can easily accept two to three suitcases plus a soft bag or two 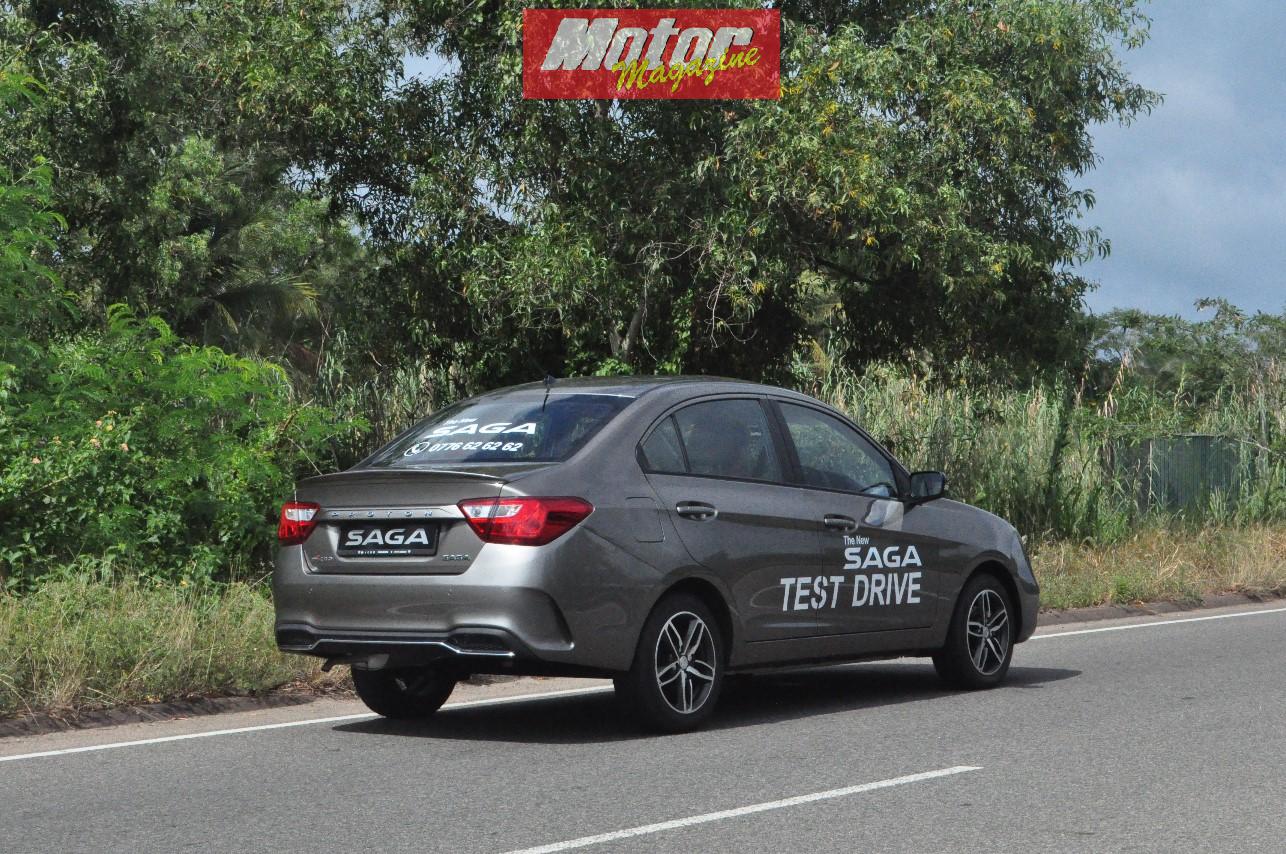 ﻿You’ve got the basic complement of two airbags, ABS brakes with EBD, plus traction control and stability control. There’s also a reverse camera to augment the front and rear parking sensors. There are two ISOFIX mounting points in the rear seat, and reading further on the Saga reveals that it secured four stars in ASEAN NCAP. It’s also said that the long front and rear overhangs that we spoke of earlier, also act as longer crumple zones. 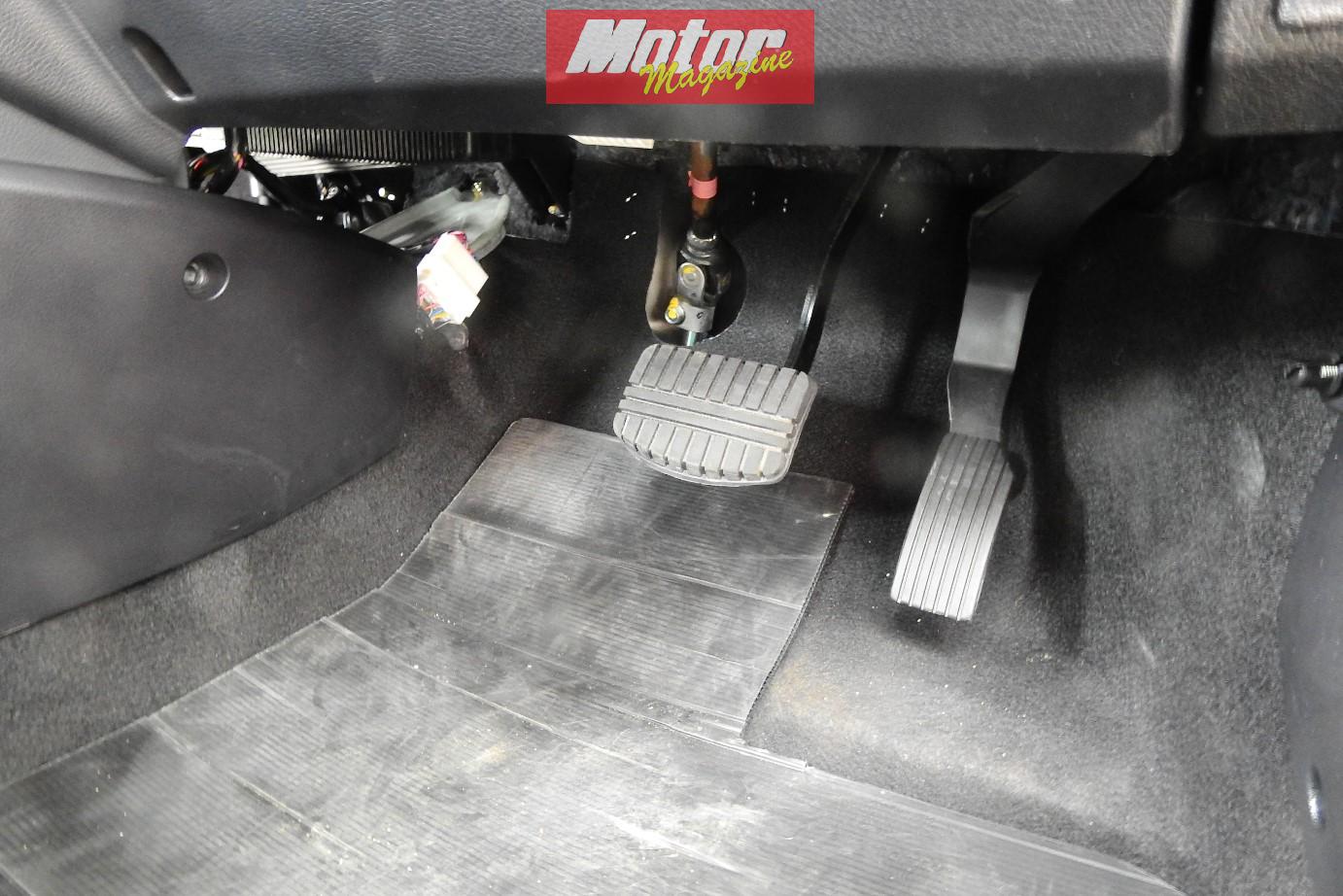 ﻿This is a pre-production Saga, and had just 6km on the clock, so we weren’t expecting stellar figures. In fact, we guessed that the brand new 1.3L mill would net less than 10km/l on average, given that it hadn’t been run-in. Our test drive route included a Colombo city drive in stop-go traffic, some 50km/h cruising, a 100km/h jaunt on the E03, and the obligatory hard driving for performance testing. Oh, and times of sitting still with the engine idling for stationary photoshoots. At the end of our 60km test drive, I switched the multi-information display to average fuel consumption, and it showed 7.6L per 100km. That works out to 13.159 kilometres per litre! An impressive showing, given that at no point did I hypermile or otherwise attempt to drive economically. The AC was on throughout our time with the car as well.Micro is yet to finalize the price at the time of writing for the Saga, as there are many components (including taxation – no, locally assembled vehicles are not completely tax free), that determine the final sum quoted. What they have settled on, though, is a 5 year / 150,000km warranty. 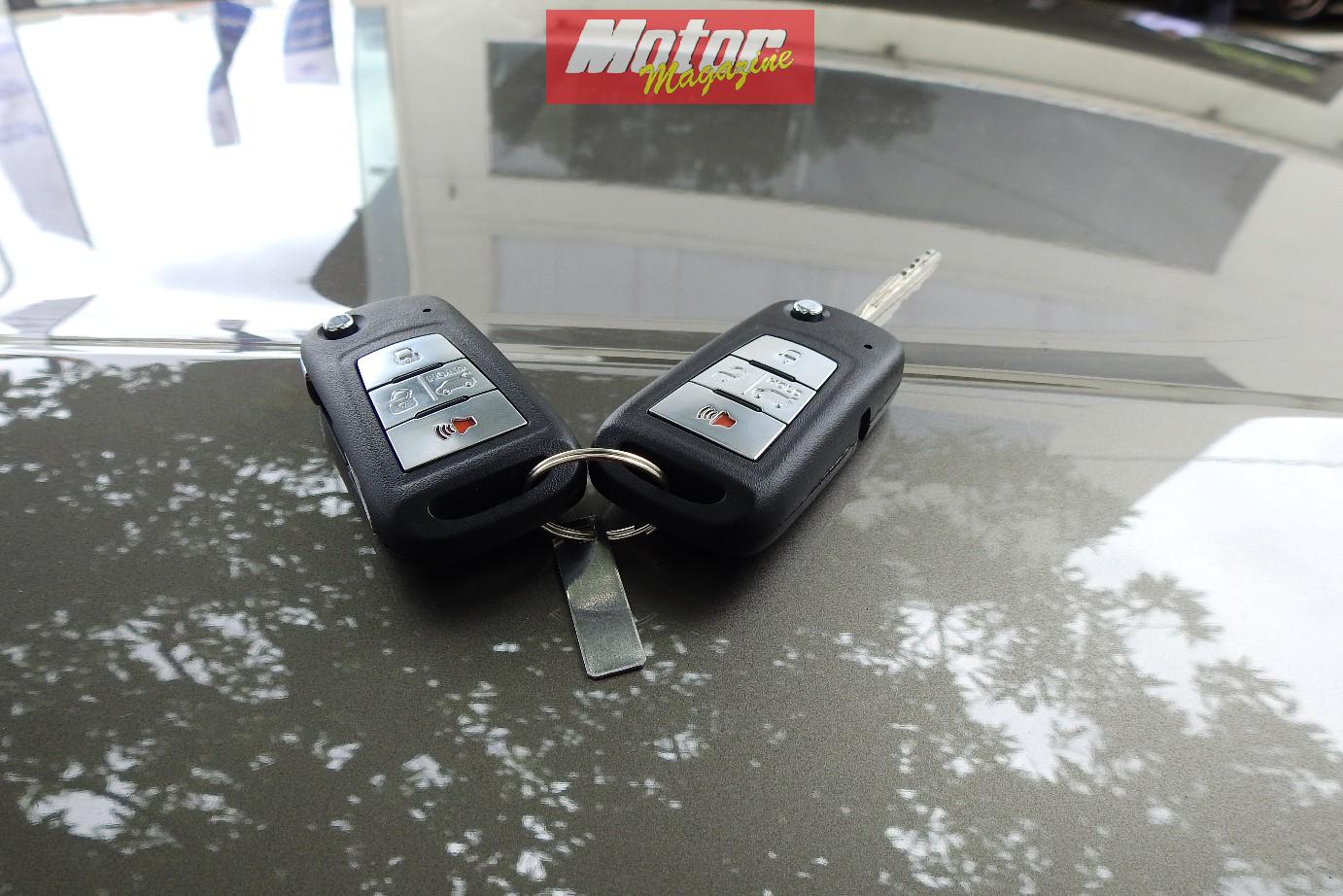 There are no brand-new competitors to the Saga in our market for a proper comparison, at the time of writing, which also means that Micro is in a unique place with this car. The closest competitor, albeit from the used market only, is the Perodua Bezza – another Malaysian product. During our test drive, no less than three people had called the Micro sales hotline stickered on the car and inquired about it, and while we were shooting video in Ja Ela, an out-of-work tour guide stopped by, as he was interested in buying a suitable vehicle now that Sri Lanka’s tourism push is in high gear. Local assembly is indeed firing up to meet the challenge of a total automobile import ban, and I’m waiting to check out the next big thing! Micro themselves have some interesting projects going on, so watch this space.