An automobile workshop that has pioneered in adopting New Technology

Motor-link was born in 1987; a unique establishment at the time - and 35 years later, still is. We have hospitals and clinics run by doctors for common and life threatening health issues. But when it comes to the health of automobiles; Motor-link has been virtually a unique solution provider until recently. In fact, it is safe to say that Motor-link has Sri Lanka’s most experienced automobile engineers headed by Mr. Rohan Silva; a graduate from the University of Katubedda in the field of Mechanical engineering in the year 1973. He completes 48 years as an Engineer by the time Motor-link and Ultra Engineering reaches the 35th year in the industry.

﻿﻿﻿﻿To date, state universities are not adequately equipped to cater to the demands of Modern Automobiles. Due to the narrow minded approach in the industry, we see less growth opportunities in design, manufacture and maintenance sectors of the Automobile industry. Further, due to the lack of acknowledgement and felicitation of professionals in the field, the automobile industry has been left dormant.

But staying strong by itself, Motor-link has developed itself through the last 35 years with technology way beyond the industry norms, and in some instances 15+ years ahead of the rest of the country.

A few highlights that sets Motor-link apart from other motor manufacturer backed or independently run organizations are:

1. In 1992 Motor link was the first and only establishment that implemented timing lights to set the timing of spark ignition type petrol engines - to obtain optimal combustion for the best fuel economy and power output.

2. Validation of services is absent (still to date) from most sectors; and especially in the automobile sector, the workshop technicians’ word tends to be the only way of validation; which at most times is not comforting to the motoring consumer. Thus, a full 16 years ahead of the implementation of the Vehicle Emissions Test regulations in 2008, and more years till the nearest workshop using this technology, Motor-link and Mr Silva started validating each and every vehicle regardless of fuel type with European and motor manufacturer standard emissions test based results to vindicate the success of the engine tune-ups conducted under the watchful eyes of Engineer Rohan Silva.

﻿﻿﻿﻿3. The setting up and operation of Motor-link was during a period that the country was in a highly unsafe and financially volatile state with the civil war that had constant bomb scares even in Colombo. During such a time, Mr Rohan Silva, had the foresight to become the first and only organization to own and operate a fully functional Automobile Workshop on wheels, also Known as a Mobile Workshop. This was truly a workshop on wheels as it was able to do a regular service with a wash and vacuum, all the way up to an engine overhaul. This was admired and appreciated by leading corporates such as EB Creasy, Darly Butler, McLaren’s, Anchor and the famous Softlogic Group for decades. This workshop, has traveled to places and worked on automobiles in some of the strangest and exclusive locations such as inside of the Rathmalana Airforce base and attended on unique and strange issues like, a simple engine misfire, which upon diagnosis, was found that Aviation Fuel had been used in cars due to mishandling and mix-up during fuel station unloading.

4. In 2009 Motor-link redefined the Automobile refinish industry - also known as the Paint Industry by commissioning Sri Lanka’s first water-borne paint capable paint booth and to date, the 1st and only fully electric and 100% environmentally friendly booth in the country. Many others use diesel powered burners that yield low quality due to the times of the baking cycle which in turn makes the difference to get a long lasting and high gloss finish.

5. As with any new technology, there needs to be a steady supply of raw material. Motor-link  spends a lot of time and energy to persuade paint suppliers to make available waterborne paints in Sri Lanka. At first all suppliers declined the request to import and supply this new product range, and the excuse given by 100% of the suppliers was that the industry is still not using 2K paints which is high in quality and durability, and in turn their sales are 80% NC products. Thus they believed that no one would adopt this technology as consumers and technicians are oblivious to the diffrence between NC, 2K and waterborne paints. Not giving up, Motor-Link stayed on its course of persuasive efforts, and in 2013 PPG, via its local supplier made a bold attempt to heed to the call of Motor-link with a challenge; at the risk of stock investment and delays in resupplying, to which Motor link gladly agreed. This was a full 2 years before any other dealer adopted this technology in Sri Lanka. PPG still remains the only 100% waterborne paint supplier which meets the global VOC levels required.

The main reasons low VOC and WATERBORNE paints are allowed and approved whilst NC and high VOC 2K paints are outlawed in most countries and specially Europe, Is due to the fact that these old type products emit ISOCYANATE Which is deadly if consumed over a threshold, as well as causing lung cancer and asthma - commonly seen among automobile painters once they reach 20years in the industry.

Another critical factor for waterborne and low VOC products to be recommended by the motor manufacturers (and its invention by the paint manufacturers) is due to its higher resistance to UV light from the sun, atmospheric pollution on the road and other naturally damaging causes like bird droppings and chemical rain which could damage the colour and the gloss of the vehicle. 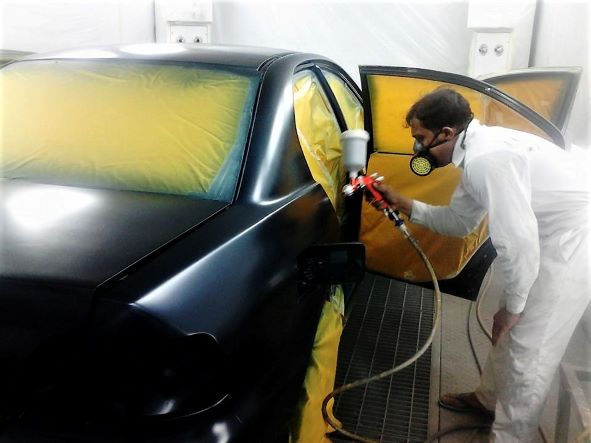 ﻿﻿6. With perfection, quality and validation as its core values, Motor-link set its sights on conquering and uplifting the collision repair industry with lots of high-tech equipment such as aluminium dent pullers, steel dent pullers, plastic welding, and spot welding equipment to offer low cost high value repairs by eliminating the previously replaced minor damaged parts to be repaired to its former strength and quality. To this end, Motor-link sourced and bought the best structural repair equipment with the worlds’ oldest (since 1951), best and most accredited chassis and structure alignment equipment available in the global market by the name of CARBENCH from Italy. CARBENCH to date is the oldest equipment manufacturer with patented (1967) universal jig fixtures with Motor Manufacturers’ approval. The closest equipment supplier with technology from expired patents of CARBENCH  were established in late 1980s, after which some more brands of limited ability equipment were created.

As testimony of this technology, one must understand the development of the jigs and its motor manufacturers’ approval ad requirement process.

Jigs are initially used in the production of the automobile to obtain duplication with minimal variations between vehicles. And this together with the increasing values of vehicles, safety regulations of motor industry and the development of the aftersales and repair industry, had caused Mercedees Benz, the worlds’ first motor manufacturer to approve CARBENCH in 1970 to its dealer network for the purpose of carrying out QUALITY REPAIRS to crash/accident damaged vehicles to the dimensions used during manufacture using the same CARBENCH jigs and fixtures that enabled the vehicle to be developed/prototyed and manufactured in the first place.

To date, CARBENCH is the only tool recomended by Ferrari, and any Ferrari that has a crash repair should only be repaired at a CARBENCH Equipped facility. Which makes Motor-link very unique as it is now the only place in Sri Lanka that the likes of a Ferrari can be repaired as opposed to exporting such vehicles back to Italy for repairs previously.

This upgrade and infusion of the CARBENCH Murana Bench, the Universal Jig system and the BMW and Mercedees Benz anchoring system enables them to attend to any type of vehicle quickly after a crash, and conduct a QUALITY REPAIR to within 1mm of its Manufacturers’ specification.

As CARBENCH has the largest number of Motor manufacturers’ approvals with over 56 manufacturers officially approving (www.CARBENCH.it) Motor-link has set a new bar to guarantee a genuine and a quality repair over some of the motor manufacturer appointed representatives as well.

7. As said previously, all this bench and jig based repairs is subjective to ones’ reasoning. Thus Motor-link embarked on certification of the quality achieved from the repair process, as it believes, that like the emissions test data based engine tune-ups, the structures of the vehicle should hold a validation certificate.

Thus Motor-link now houses the CARBENCH Contact evolution, a true revolutionary product to measure a complete vehicle to 0.1mm accuracy and check against the motor manufacturer’s blueprint (CAD) data to validate the dimensions.

This equipment is the worlds’ most accurate, approved and versatile in a way that a total number of 5 encoders with over 2.7meter fixed arm (5.4m working radius) enables seamless 3D measuring, with each encoder having a sensitivity of 40,000 points over a 360degree axis.

Thus coupled with the MURANA universal Jig or as stand-alone equipment, it provides great vehicle checking ability to diagnose the extent of the damage, its after repair conformity as well as even a pre-purchase vehicle inspection report to find out if the vehicle is in its original condition or not.

Motor-link is now managed by the second generation – namely Mr. Ravith silva who is an Automobile Systems Design engineer with enormous experience and vision. As testimony to his pedigree, he was swiftly inducted to McLaren Automotive, Working, UK to be a Manufacturing Engineer on the McLaren Mercedees Benz SLR project and its versions like the sterling moss 722 and the convertible. Being in a Formula1 environment Mr. Silva knows the competitive advantage of technology and team work. And it is seen from his many workings within Sri Lanka since arriving in 2009.

As men and women are born, and live with good and bad health and obtain/seek services of professional medical practitioners and establishments - who may not always be able to give life back - or put those broken limbs back to the dimensions of God; it’s a marvel that engineering professionals like Sr. Mr. Silva and Jr. Mr. Silva are extending, saving as well as giving life to pieces of steel and plastic using their decades of knowledge, pragmatism, facilities and high tech equipment. 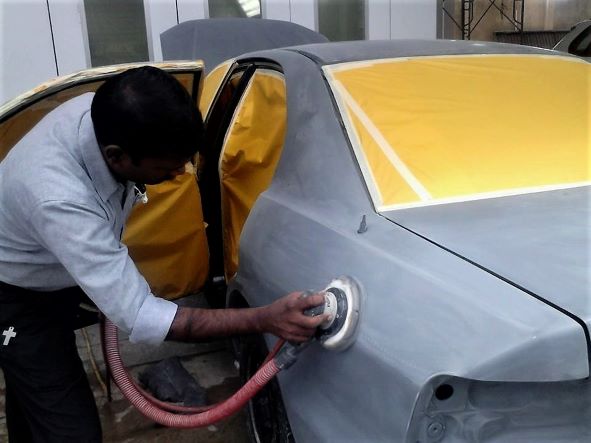 ﻿﻿8. Motor-link is also a part of SLASPA and is an ISA-CERTIFIED FAIR TRADE WORKSHOP which continues to provide ethical and fair service to all their work through the FAIR TRADE prerogative.

So in summary, vehicles are meant to be taken good care of by their owners; and at times during crashes or sudden mechanical failures, by professional engineers and organizations. It is indeed a marvel to have an establishment such as Motor-link and Ultra Engineering in Sri Lanka who have stood the test of time and are to date offering even better services for all of the motoring community who value safe and well maintained vehicle.

Congratulations to Mr. Rohan Silva on this achievement - as doing a business is hard enough, but doing it through a 30-year war and a global pandemic as well as creating a second generation who is as passionate and qualified is no easy task.

We’ve been living with power cuts for several months now. Whenever the power goes out, our lifelin

Through the years, we have discussed many aspects of vehicle ownership, new developments in the auto